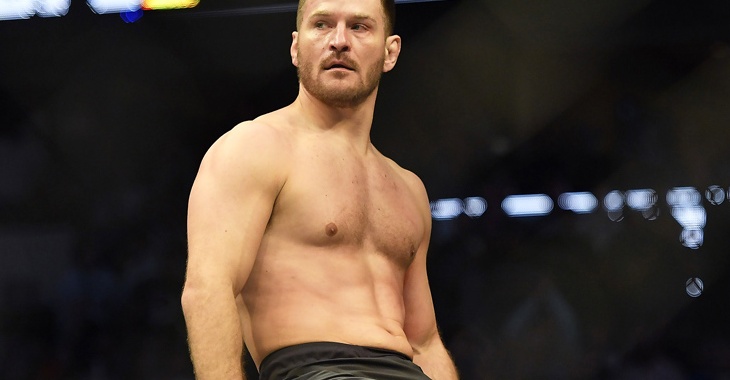 Last night, in the main event of UFC 220, Stipe Miocic made a record-setting third-straight defense of the UFC heavyweight title, derailing the hype train of French-Cameroonian knockout artist Francis Ngannou with a dominant unanimous decision win.

In the buildup to this fight, many members of the MMA community noted that the promotion seemed to hope Ngannou would win the title, evidently sensing it had found it’s next cash cow. Miocic made no secret of the fact that he shared this opinion, admitting he felt disrespected by the promotion.

“Listen, I feel a little bit disrespected, but I’m not going to dwell on it,” Miocic said on a recent episode of The MMA Hour. “He’s got more hype on him I guess. The guy hits super hard. We’re making a big thing about it, I’ve fought some good guys, you know? That’s how we are. I’m not much of a trash talker I just like to fight, that’s what I do.”

The disrespect Miocic felt manifested itself when UFC President Dana White attempted to put the heavyweight belt around the champ’s waist in the moments after the fight – as per tradition. In a moment of what seemed like frustration, Miocic could be seen taking the belt from White, and giving it to his coach, who then adorned him with it.

Oh shit Stipe didn’t let Dana put the belt around his waist. He said continuously in the build to this fight that the UFC wanted Francis to win (probably true). Major shade. #UFC220

While it’s possible that this tense moment had another cause, Miocic certainly looked like a fighter who doesn’t like the way he’s been treated by the UFC of late. Whatever the case, there seems to be no doubt in Miocic’s mind where he stands in MMA history.

What do you think of this strange moment between Stipe Miocic and Dana White?