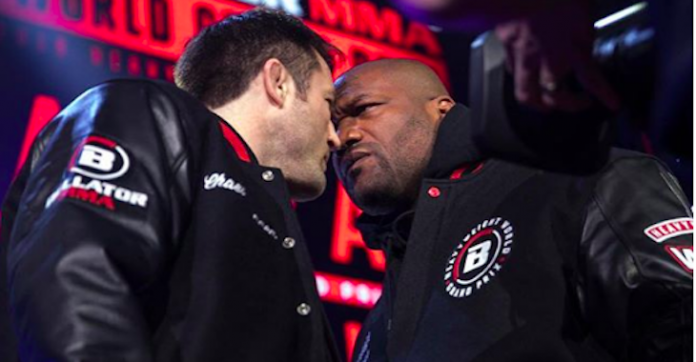 Last night, Bellator MMA returned to our screens with Bellator 192, arguably one of its biggest cards to date.

In the main event, Chael Sonnen defeated Quinton “Rampage” Jackson by unanimous decision, advancing to the second round of the Bellator heavyweight Grand Prix in the process.

In the co-main event, which was originally supposed to be the main event, we got one of Bellator’s most elite title fights to date, as former UFC title challenger Rory MacDonald scraped by Douglas Lima to capture welterweight gold.

Though MacDonald and Lima represent some of the finest talent on the Bellator roster, their disclosed salaries don’t seem to reflect this reality.

According to a report from MMAFighting, MacDonald and Lima pocketed $100,000 each for their 5-round war. While this figure is nothing to smirk at, particularly when it’s combined with sponsorship amounts and other bonuses, it pales in comparison to the disclosed paydays earned by Sonnen and Rampage, who earned $300,000 apiece.

Elsewhere on the card, former lightweight champion Michael Chandler pocketed $50,000 for his defeat of Goiti Yamauchi. Yamauchi was paid $23,000 to show, and would have earned another $23,000 if he’d won.

Interestingly, rising star Aaron Pico, who has fought just three times, earned more than the well-established Michael Chandler, pocketing $30,000 to show and $30,000 to win for his thudding knockout of Shane Krutchen.

What do you think of the payouts for Bellator 192? Is it fair that the veterans Chael Sonnen and Quinton “Rampage” Jackson pocketed so much more than the elite fighters Rory MacDonald and Douglas Lima? Join the debate in the comments section.