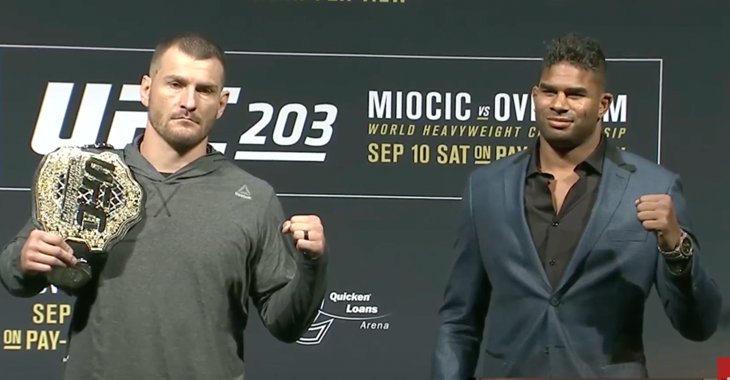 In September of 2016, the UFC touched down in Cleveland, Ohio – the hometown of UFC heavyweight champion Stipe Miocic – with UFC 203. The card was headlined by a title fight between Miocic and dangerous challenger Alistair Overeem – a fight Miocic won via first round knockout.

Despite being the champion, and the clear focal point of this Cleveland event, however, Miocic was soundly out-earned by his challenger, pocketing just $600,000 for Overeem’s $800,000. This, apparently, is rubbing the champ the wrong way.

Miocic explained his frustrations on Monday’s edition of The MMA Hour.

“I just felt like I was kinda crapped on a little bit,” Miocic said. “I try to do things right and work with them, and they just didn’t give me a great deal. That’s my own fault, but also they knew what they were doing. They took my kindness for weakness.

“They told me it was the best deal they could do, and I said, oh okay, great. And then come to find out, it wasn’t.”

Miocic then explained that he attempted to express his financial frustrations with the UFC in the wake over UFC 203, but that the promotion did not give him a satisfying answer.

“You’re making money off me in my hometown, and you’re giving the man that’s a challenger who’s never won the title in the UFC, you’re giving him more money?

“It definitely should change. But the fact that my challenger made more money than me in my last fight was just kind of a slap in the face.”

Miocic summed up by reiterating that he just doesn’t think it’s fair that a challenger make more than a champion in that champion’s hometown.

“We’re definitely not being unfair,” he added. “We’re not looking for a couple million or anything like that, but definitely getting compensated for winning the belt, defending the belt in my hometown, and also the guy making more money than me is just unheard of. That’s terrible.”

Do you think Stipe Miocic has a point here? Should the UFC heavyweight champ be paid more money? Sound off, PENN Nation!