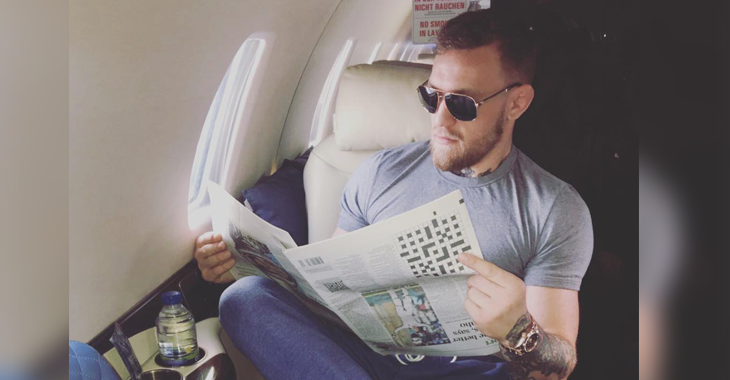 As the first fighter ever to wear UFC gold in two divisions concurrently, Conor McGregor is one of the best fighters in the world. With numerous UFC records in the areas of fighter pay and pay-per-view sales, and side projects ranging from video game appearances to short films with John Lovitz, he’s also an astute business man.

The latest proof of McGregor’s business savvy occurred earlier this month, when his company, McGregor Sports and Entertainment, began making moves to trademark his nickname “The Notorious,”

This report comes from ESPN.com.

As ESPN reports, McGregor currently has an arrangement with Reebok that allows them to use the nickname. That said, the clothing apparel giant does not own the trademark for it, nor does the UFC, or its new parent company WME-IMG. McGregor aims to lock up that trademark while he still can.

Apparently, the Irishman plans to use this trademark for things like aftershave, video games, books, clothing, restaurants, barbershops and health clubs.

McGregor is not the only fighter to attempt to trademark words or phrases in the past. His fellow UFC pay-per-view star Ronda Rousey has done the same, using her corporate entity Ronda Rousey Inc. to trademark the terms “F*ck Them All” and “DNB” which stands for “Do Nothin’ B*tch.”

McGregor’s current arch rival, retired boxing great Floyd Mayweather, has filed for a baffling number of trademarks over the course of his career – more than 230, according to ESPN.

When we last saw McGregor in action, he knocked out Eddie Alvarez to win the UFC lightweight belt. This belt joined the UFC featherweight belt, which he won with a 13 second knockout of Jose Aldo, on his already crowded mantle. Since then, McGregor has been stripped of the featherweight title – though he still considers himself the division’s king.

At the moment, he’s enjoying a hiatus from competition to father his first child. Though rumors of a boxing match with Mayweather continue to fly, he’s likely to return to a battle with the winner of Khabib Nurmagomedov and Tony Ferguson’s upcoming interim lightweight title fight.

Who do you want to see Conor McGregor fight next? Sound off, PENN Nation!