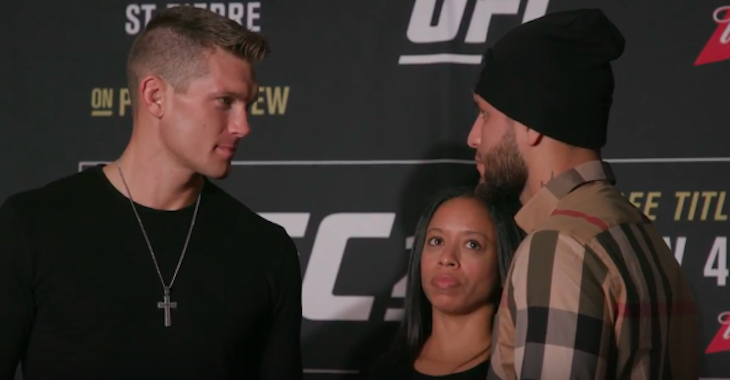 Stephen ‘Wonderboy’ Thompson knows exactly what it takes to beat Jorge Masvidal – He did just that when he scored the unanimous decision over ‘Gamebred’ at UFC 217.

Masvidal (35-14) is a different beast nowadays, and will have his second crack at winning the UFC welterweight title when he takes on Kamaru Usman (18-1) in the rematch at UFC 261 this weekend.

With ‘Wonderboy’ (16-4-1) making a recent appearance on ‘The Joe Rogan Experience,’ the resilience of Masvidal was a hot topic of conversation.

Stephen "Wonderboy" Thompson on Jorge Masvidal and what fighting him was like pic.twitter.com/BnwoiNruen

“That’s somebody that you cannot break this guy’s will in a fight,” Thompson told Rogan about Masvidal. “I’ve seen it. I’ve broken guy’s wills in the fight. When a guy like that, who comes out just as hard in the last as he does in the first, and still has got power and still is just a savage just wanting to rip your head off? He’s a scary dude.

“When you hit (Masvidal) and he smiles at you…Normally when guys do that, they’re hurt. But this guy? You know that he’s just a G man,” Thompson added.

Both Thompson and Masvidal have been in the game a long time. Thompson signed with the UFC in 2012 and Masvidal joined the following year.

But it wasn’t until 2017 that the pair finally met in the Octagon. It’s a match-up that came together through mutual respect when both men found themselves out in Singapore for UFC Fight Night 111: Holm vs Correia.

“I love (Masvidal),” said Thompson. “And it was funny, I was in Singapore. Me and him both were there as guest fighters and that’s where we made that fight happen. We had planned it out there. He was wanting to work his way up and I’d just lost to Tyron (Woodley) the second time. So I was like, ‘let’s make it happen.’ So I think what’s changed from him, I wouldn’t say so much his style, but his mindset.”

It’s interesting to hear Thompson reflect on a change he perceived in Masvidal. Following the loss to ‘Wonderboy,’ ‘Street Jesus’ seriously stepped his game up and tore threw Darren Till and Ben Askren before beating Nate Diaz to win the BMF belt. He refers to this stage of his career as, ‘The Resurrection.’

The surge in both form and status in the UFC lead to the first title encounter with Usman at UFC 251. Despite losing the fight after stepping in at six weeks notice, the event cemented Masvidal’s status as a massive pay-per-view draw.

That show was the sixth-most successful in UFC history and brought in 1.3 million buys.

This time out, Masvidal has a full camp behind him and will be looking to rediscover his best form. Usman though, is quickly enhancing his reputation as one of the best welterweights of all-time.

Thompson may have suggested that Masvidal’s will cannot be broken, but ‘The Nigerian Nightmare’ has promised to do just that.

With two other titles on the line, there will certainly be plenty of eyeballs on this one.