This year, the Ellismania card included all the madness we’ve come to expect from previous shows – including a three-way, blindfolded boxing match in which all three fighters were outfitted with remote-controlled shock-collars.

The undeniable highlight of the evening, however, was the main event, which saw Ellis take on Shane Carwin – a former UFC interim heavyweight champion, and a man widely considered the hardest puncher in UFC history – in a three-round boxing match. 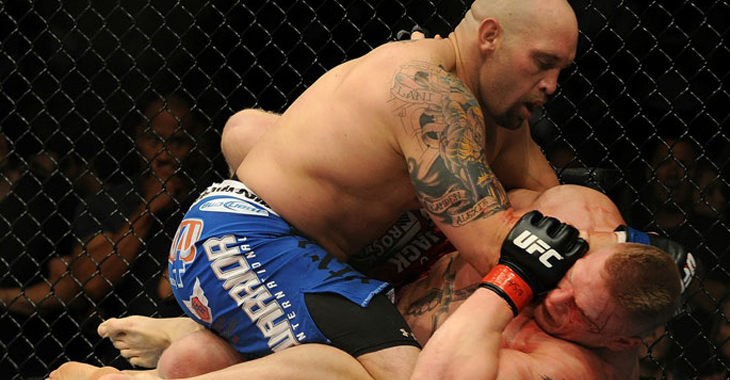 At a glance, this matchup would obviously seem like a suicide mission on Ellis’ part. Not only is he a far less experienced fighter than Carwin, but he’s also a much, much, much smaller man. For Ellis’ safety, however, measures were enacted to help level the playing field. Carwin entered the bout with one arm duct-taped around his waist. Yes, you read that sentence correctly.

Unfortunately for Ellis, Carwin’s handicap didn’t change much. Though he miraculously survived the first round, he was dropped in the second. Not long thereafter, the radio host was sent spinning to the floor by a left hook in close. This time, he stayed down for good, rendering the one-armed Carwin the winner by KO.

Watch the video above to catch the final moments of this strange, but undeniably watchable encounter.

Now that this hilarious showdown is in the rear-view, Carwin will shift his focus back to a planned return to legitimate MMA competition. Despite his status as a former UFC interim titleholder, Carwin’s comeback will not occur in the Octagon. Instead, he’s likely to end up in a league like Bellator or Rizin Fighting Federation.

Ellis, meanwhile, will return to his job as a radio host. Despite his rough night against Carwin, it’s worth noting that the former pro skater is actually a decent fighter, having gone 2-0 in boxing matches with UFC vet Gabe Ruediger, winning the first by KO and the second by decision.