This Weekend, Shane Carwin will Fight Pro Skater Jason Ellis with One Arm Tied Behind His Back

This Saturday, inside Las Vegas’ Hard Rock Casino, former UFC interim heavyweight champion Shane Carwin will partake in a boxing match with pro skater turned radio host turned fighter, Jason Ellis. He’ll do so with one arm tied behind his back.

This bizarre, but undeniably intriguing showdown will headline Ellismania 13, an annual event promoted by Ellis, and the self-proclaimed “wildest night in combat sports.”

The reason that Carwin will have one arm tied behind his back, of course, is to level the playing field. Not only is he an amply more experienced fighter than Ellis, he’ll also outweigh the radio host by something in the area of 100lbs.

“I’m not really excited about doing it,” Ellis said of the fight in a promotional video posted to his website. “A lot of people have told me he’s the heaviest puncher. Brendan Schaub, who was a heavyweight in the UFC himself, who sparred with Shane Carwin, said that he is the heaviest puncher ever in the UFC out of anybody. [Out of] anybody in the UFC, he’s the hardest puncher, and he’s going to punch me.”

“I can not get hit my him,” he added in a recent post to Instagram. “I think maybe I can take a couple of jabs, but I think one uppercut, one hook lands flush, and I’m unconscious. I think the same goes for a body punch.” 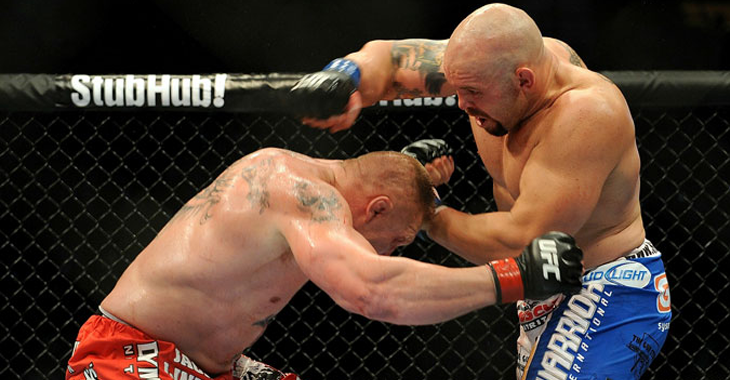 So how is Ellis prepping for the bizarre – and dangerous – challenge?

It is worth nothing that this is not Ellis’ first foray into the world of combat sports. The former pro skateboarder, who is now 44, has partaken in a number of amateur MMA bouts and one pro bout. He also engaged in a pair of exhibition boxing matches with UFC veteran Gabe Ruediger, winning the first by knockout, and the second by decision. That said, his fight with the hulking former champion Carwin – one-armed or not – is not likely to go so well.

Carwin has not been seen in action since a 2011 decision loss to Junior Dos Santos. Recently, however, the heavyweight announced that he’s planning a return to mixed martial arts competition. And while he suggested that this comeback would occur outside the UFC, he was not referring to Ellismania 13. We’ll likely see him back in legitimate mixed martial arts competition sometime in the near future.

What do you think of this bizarre showdown? Sound off, PENN nation!