Zhang Weili was hoping to reclaim the strawweight title when she squared off with Rose Namajunas tonight at Madison Square Garden.

Zhang (21-2 MMA) and Namajunas (11-4 MMA) had originally clashed back at April’s UFC 261 event, with ‘Thug’ emerging victorious by way of knockout.

Rose Namajunas had entered Saturday’s immediate rematch on a two-fight winning streak. Prior to dethroning Zhang Weili back in April, the American was coming off a split-decision victory over Jessica Andrade.

Meanwhile, ‘Magnum’ was looking to make a statement after having her 21-fight winning streak snapped by ‘Thug Rose’. The Chinese standout was training with former UFC champ Henry Cejudo in preparation for tonight’s highly anticipated rematch. 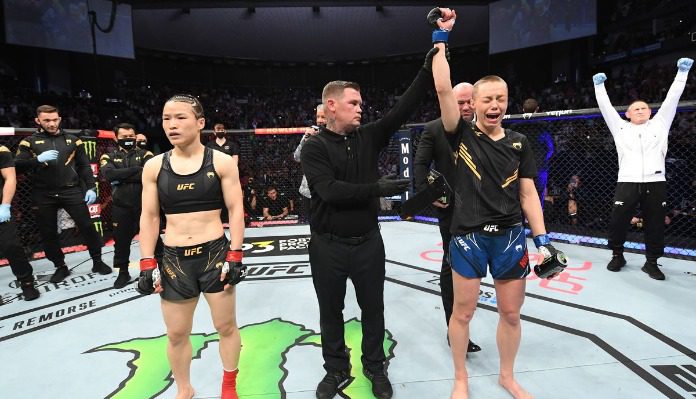 “You know actually I am just so grateful for this opportunity to fight in New York and fight in front of such a big audience to showcase my skills,” Zhang said through her translator. “I was very happy training with my coaching team. You know we can’t really control the outcome of the fight but we just try to control the effort that we put in. I just try and win every second. The overall game plan worked well. I just feel sorry for the coaches because they did a tremendous job for me.”

Who would you like to see Zhang Weili fight next following her split decision loss to Rose Namajunas at UFC 268? Share your thoughts in the comment section PENN Nation!