CM Punk is Training For His Upcoming Return to MMA

Has Conor McGregor changed things forever? Alistair Overeem may be fighting a heavyweight boxer, Ronda Rousey could be jumping into the wrestling ring, who knows what could be next. It does look like history seems to repeat itself. Fresh off of the heels of McGregor dipping his toes into the boxing ring against Floyd Mayweather, former pro wrestler CM Punk is ready to get back into the Octagon. Duke Roufus shared a picture of UFC lightweight John Makdessi and CM Punk after a training session and announced that both of them are waiting for their fights to be confirmed. 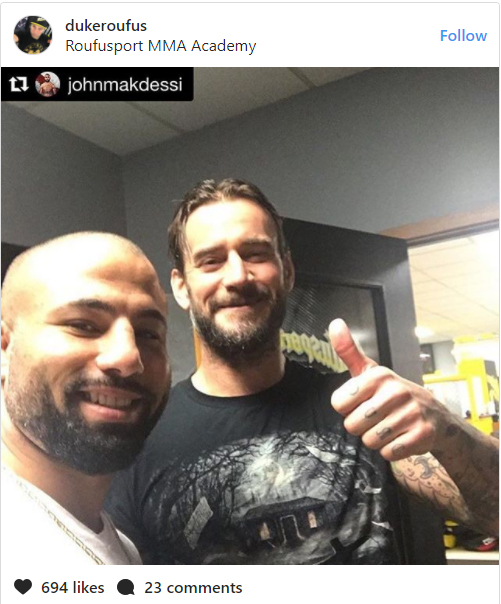 Even though CM Punk’s first fight with the UFC didn’t go his way, he was still a big draw at UFC 203. The big question is if it will actually be in the UFC. Punk’s previous opponent Mickey Gall may have been a steeper challenge than expected for his transition into the cage. Dana White’s new Contender Series could be a place for CM Punk to come back and fight a more inexperienced opponent. However, with CM Punk putting a lot of eyes on the UFC again, it’s probably unlikely his return would be stuck on UFC Fight Pass.

This article appeared first on BJPENN.COM
Previous articleKhabib Nurmagomedov makes his pick for UFC 216’s Tony Ferguson vs. Kevin Lee bout
Next articleVIDEO | Ronda Rousey and the Rest of Her 4 Horsewomen Are in a WWE Angle
© Newspaper WordPress Theme by TagDiv