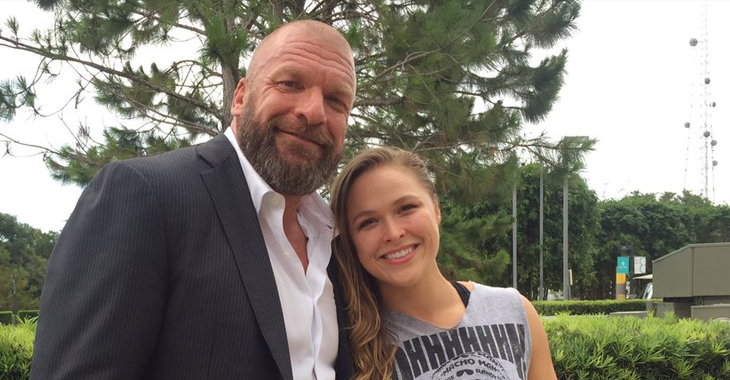 Ronda Rousey can do anything. Despite her two-fight losing streak in the UFC, Rousey has the star power to jump into any other sport, or come back to the Octagon anytime she wants. With movies and television also an open door for Rousey, it’s the wrestling ring that seems to lure her the most. Her entire namesake is based on  the late “Rowdy” Roddy Piper and she’s recently been seen on WWE TV, cheering on her friend Shayna Baszler in the promotion’s all-female Mae Young Classic tournament. Rumors buzzed about Rousey and the WWE, but nothing concrete was ever released. Now, Triple H just gave us a hint that it may be close.

“First of all, [Ronda Rousey]’s got to stop throwing me around the ring. The last time I was in the ring with her, Ronda threw threw me from one side to the other. I didn’t like that very much. Ronda is a huge fan. That’s not been a secret, that’s where the ‘Rowdy’ Ronda comes from. She’s definitely interested and we’re having conversations. I’ll say it right here on ESPN, if she wants the opportunity [to wrestle for the WWE] I’d be willing to give it to her.”

“First things first, she has the passion. She’s loved this business for a long time. She’s enamored with it. She’s enamored with the entertainment component of it and the physicality of it. If it’s something she wants to do, I think she’d be great at it because she would dedicate herself just like she has to everything else in her life.” — Triple H said to ESPN.

Can you imagine Ronda Rousey running the ropes and slamming women (and men) on their backs with her elite Judo skills? It seems like the offer is there if Ronda Rousey wants it. There could even be a chance to recast The Four Horsemen stable with her own group of ladies that she borrowed the name for in MMA. We’re not holding our breath yet, but if Triple H spoke it into the universe on an outlet as big as ESPN, then we’re closer than ever.

The #MaeYoungClassic will celebrate and showcase female competitors from around the world. Great to have @RondaRousey join us tonight. pic.twitter.com/dQy9C1qFbH