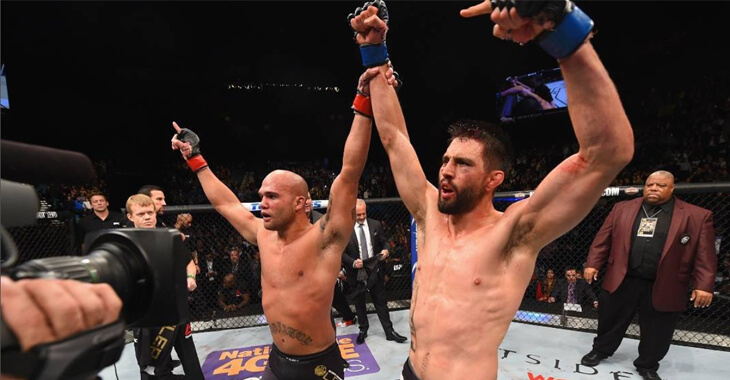 #OnThisDay Last Year: We witnessed a war between @Ruthless_RL and @CarlosCondit 🔥 🔥

When Carlos Condit was scheduled in for a welterweight title shot against Robbie Lawler on January 2 of 2016, there was some debate as to whether or not he actually deserved the opportunity. Though he stood out as a long-time member of the welterweight elite, and as a former champion in the UFC and WEC, he was just one win removed from a loss to Tyron Woodley. As impressive as that win was – it saw him batter Thiago Alves to a doctor stoppage – his recent loss to Woodley left many questioning the legitimacy of his title shot.

In the end, Condit proved he deserved the shot in the biggest way possible, engaging Robbie Lawler in arguably the best fight of the year 2016 and one of the greatest welterweight fights ever. Given the fact that Condit and Lawler are known as two of the most consistently entertaining fighters in MMA, this is not particularly surprising.

Over the course of this five round fight, Condit and Lawler both hurt each other on multiple occasions, with Condit favoring a more diverse, volume-based striking attack, and Lawler leaning on the kind of power strikes that could joggle planets out of their orbits. It was the kind of incredible, back-and-forth battle that will never be forgotten. In the end, of course, the judges’ would award Robbie Lawler a split decision win – though this verdict would go down as one of the most controversial judging decisions of the year.

With this result, Lawler retained the welterweight title, though he would lose that title in his next fight, succumbing to a meteor of a punch from Tyron Woodley in the first round of their July title fight.

Condit also lost his next fight after Lawler, tapping to a first-round rear-naked choke dealt by renowned jiu jitsu wizard Demian Maia. As of now, it is not known if he’ll fight again, or if he’ll opt to hang up the gloves.

On the one-year anniversary of Lawler and Condit’s unforgettable welterweight war, let us know how you scored the fight! Sound off, PENN Nation!