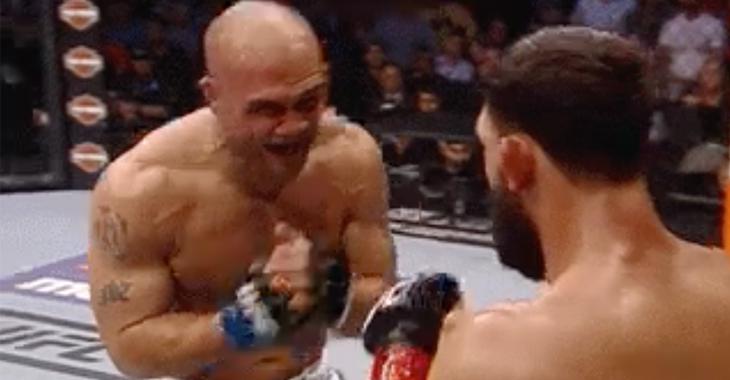 The man who took the win in the UFC’s 2015 Fight of the Year may already have secured the same award for 2016.

UFC welterweight champion Robbie Lawler has been in some brutally exciting fights as the reigning champion of the 170-pound division. His second fight with Rory MacDonald in 2015 and fight with Carlos Condit in 2016 are some of the most talked about fights today.

With Lawler set to defend his title against Tyron Woodley at UFC 201 this Saturday, here’s a little teaser into the madness of “Ruthless” Robbie Lawler.

It's kind of scary how much Robbie Lawler enjoys fighting… #UFC201 pic.twitter.com/1QV0MlVmFI

After being hit by Johny Hendricks in their first fight at UFC 171, Lawler’s reaction is priceless. “Ruthless” laughs crazily after getting punched in the face by Hendricks. Although Lawler fell short by losing to Hendricks in a five-round decision, he was able to avenge the loss later in the year to become the UFC welterweight champion of the world.

Will Robbie Lawler secure another title defense and keep his belt? Share your prediction for the fight in the comment section!