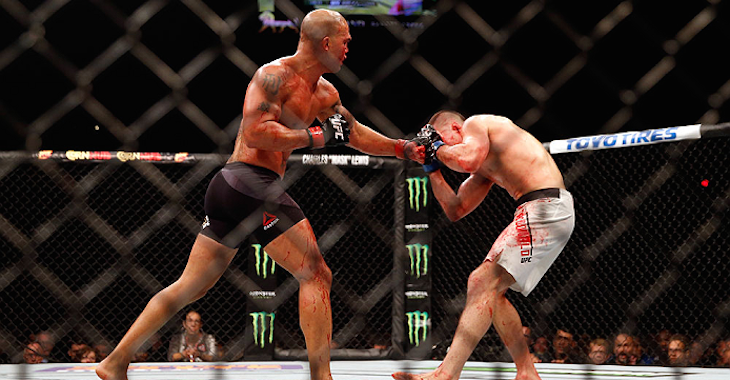 Robbie Lawler and Rory MacDonald left it all in the octagon and stole the show with their fight of the year candidate on Saturday night at “UFC 189”. Lawler left the octagon with the gold, but MacDonald’s stock only went up last night after he showed how much heart and determination he had.

UFC fighters took to Twitter to react to the crazy fight as it unfolded— check out their reactions below!

Lawler styled on McDonald last time. I have a feeling McDonald might win the rematch. Who you got? #UFC189

This should be an interesting one! #UFC189 @ufc I want that belt baaaaaaack!

Another round McDonald more volume lawler better shots. But Rory is getting busted up a bit. 10-9 lawler

What a blood mess

Ladies and gentlemen, we officially have a war on our hands. #UFC189

What a f#×kin fight! Those boys are Champs. Hats off to both of u @Ruthless_RL and @rory_macdonald no loser in that fight. Whay heart!

@Ruthless_RL is my favorite fighter

What a FIGHT! Helluva performance by @Ruthless_RL and a fantastic win. Incredible effort by @rory_macdonald as well. #UFC #UFC187

I want to be like Robbie Lawler when I grow up

What was your reaction to the fight as it was playing out? Share your thoughts in the comment section below!