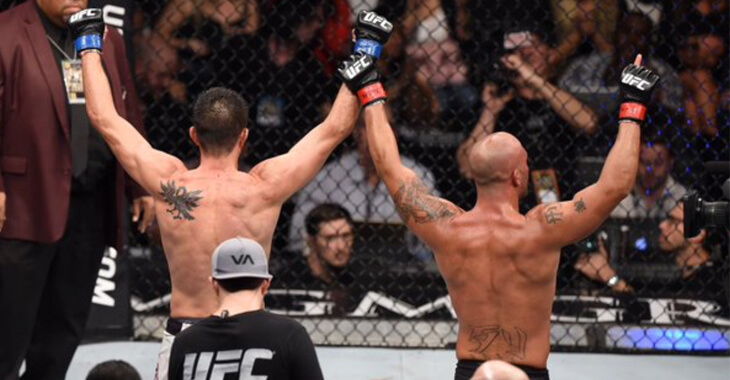 The fight, which was contested almost entirely on the feet, saw the two stone-fisted fighters pummel each other to the brink of consciousness, with Swanson ultimately emerging the victor with a unanimous decision.

Despite the epic nature of this fight, however, Swanson explained on Monday’s edition of The MMA Hour that he thinks Fight of the Year honors should go to another 2016 epic: a January welterweight title showdown between then champion Robbie Lawler and long-time contender Carlos Condit. Lawler won this fight with a widely debated split decision.

“I would give [Fight of the Year] to Condit and Lawler,” Swanson told host Ariel Helwani on the show. “There was a lot at stake, and it was five rounds, and they threw down. That would have been my pick.”

After coming up short against Lawler, Condit briefly considered retirement before returning to action against the streaking Demian Maia. Condit would lose this fight by first-round submission. As of now, it’s not known what the future holds for the fan favorite.

Lawler, meanwhile, followed his defeat of Condit with a first-round knockout loss to former training partner Tyron Woodley. Though he was briefly scheduled for a return to action against Donald “Cowboy” Cerrone at UFC 205 in November, he ultimately elected to give himself a bit more time to recover from his loss to Woodley before returning to competition. Though nothing is official at the moment, it’s rumored that he might take on a former foil in Nick Diaz at UFC 209 this coming March.

What’s your pick for 2016’s Fight of the Year? Sound off, PENN Nation!