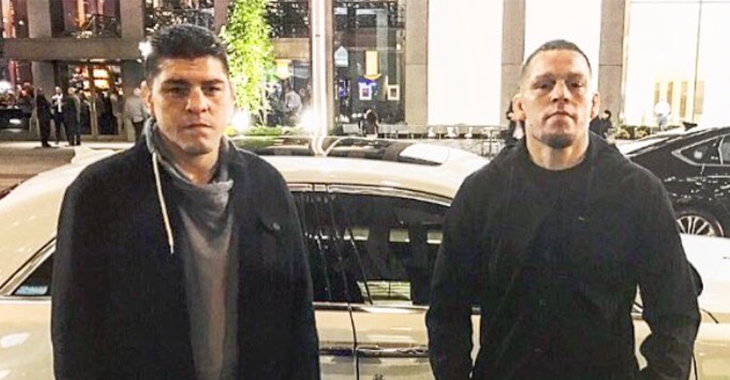 An unlikely trio was seen together backstage at the UFC on FOX 22 event that was held over the weekend in Sacramento, California.

Stockton, California bad boys Nick and Nate Diaz were seen talking with Sage Northcutt backstage and Nick apparently posted a photo together along with fellow-UFC fighter Leslie Smith on his Snapchat account.

MMA journalist Chamatkar Sandhu said it best if you are familiar with the Diaz brothers, Smith, and Northcutt. “There it is. MMA brings people from all walks of life together. Sage Northcutt hanging out with Leslie Smith as well as Nick and Nate Diaz,” Sandhu tweeted.

There it is. MMA brings people from all walks of life together. Sage Northcutt hanging out with Leslie Smith as well as Nick and Nate Diaz. pic.twitter.com/LDTTVaL14s

Olivi tweeted, “Sage meeting the Diaz bros and crew is the best.” Olivi also posted a photo of the three talking backstage and captioned the photo, “Cuz they’re the 3 best friends that anyone could have!”

Sage meeting the Diaz bros and crew is the best

Cuz they're the 3 best friends that anyone could have! pic.twitter.com/N4Dln8D3eo

Nick Diaz has not fought since January 2015 where he and Anderson Silva fought in a five-round main event where Silva initially was declared the winner by unanimous decision. The bout was later ruled to a no contest after both Silva and Diaz tested positive for banned substances from their fight drug tests and were suspended from competition. Diaz has been eligible to fight since August of this year, but has not been in any rush to get back to competition stating that he needs a big name and a big payday if the UFC wants him back in the Octagon.

Nate Diaz is also in no rush to get back to competition in the Octagon unless it is the trilogy bout against his rival Conor McGregor. The two pay-per-view kings both own a win over each other as Diaz finished their first fight by submission at UFC 196 while McGregor went on to pick up a majority decision win over Diaz in their second meeting at UFC 202.

Northcutt was handed his second loss at UFC Fight Night 22 and perhaps the meeting backstage with the Diaz brothers will lead to some training sessions together in the future. What do you think of Sage Northcutt training with the boys from the 209? Sound off in the comment section!