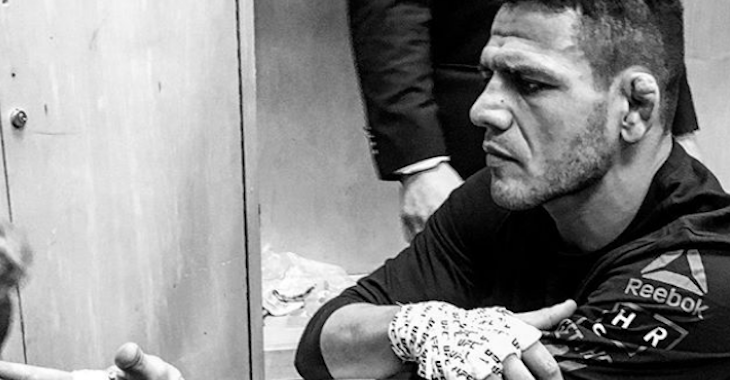 On Saturday night, in the main event of the stacked UFC on Fox 26, former UFC lightweight champion Rafael dos Anjos established himself as one of the welterweight division’s top contenders by dominating Robbie Lawler to a unanimous decision win. In fact, dos Anjos could easily be the next man in line for UFC welterweight champ Tyron Woodley. He certainly believes he’s earned the chance.

“I’m able to wait for him,” Rafael dos Anjos told the media at the UFC on Fox 26 post-fight press conference, assuring he’s willing to wait for a crack at the champ (h/t MMAFighting). “I think I did enough in the division to deserve the title shot. And I’m not a guy that talks so much, try to get that title shot because I’m talking bad about people, cursing people. I just go there and do a great performance like I did tonight. I hope so. Dana White said that. That’s what I hope.”

“People forget,” dos Anjos continued. “Most of the people in MMA, MMA fans, they have very short memory. People remember you because of your last performance; they don’t remember your whole career. I never had an easy path to get to the lightweight belt. I’m not gonna have an easy path to the get to the welterweight belt. I’m not the guy that talk much, I don’t curse people. I just go in there and work.”

Whenever he gets his fight with Woodley, Rafael dos Anjos believes he will be one of the toughest fights of Woodley’s reign thus far.