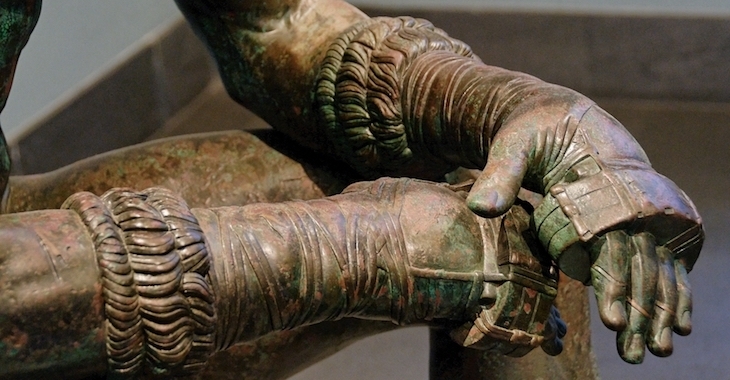 Fighting for sport is practice that is thousands of years old, dating back to the Roman Empire and even deeper into the tattered volumes of history. The recent discovery of a pair of Ancient Roman boxing gloves, which were unearthed near Hadrian’s Wall in the United Kingdom, provides an amazing reminder of just how far-reaching the roots of modern pugilism really are.

Per a report from The Guardian, these “gloves” – really more like leather hand-coverings – date back to roughly AD120. Thought to be the only surviving example of their kind, these artifacts are but the latest discoveries found in an ancient cavalry barrack situated under a fourth-century stone fort called Vindolanda, south of Hadrian’s Wall in Hexham, Northumberland, UK.

Despite the gulf of time between us and the users of these gloves, they are remarkably well preserved. According to The Guardian, they can still be worn comfortably, and one of them remains imprinted by the knuckles of a long-dead fighter. One of the gloves also seems to have been repaired by its former owner, an indication that it was both well-used and valued.

“It’s always tremendously exciting when you find something that you know about through other sources – depictions on wall paintings, vases … but to see the real thing is something quite unique,” Patricia Birley, the former director of the Vindolanda Trust, and one of the primary researchers of the gloves told The Guardian. “You learn so much more … For example, the larger of the gloves has been repaired. The owner has really wanted to keep this thing going, so he’s done his utmost to repair it and patch it. It’s that human touch that you get through the real object.”

See these amazing artifacts in the image below. Photo via The Vindolanda Trust

The reason these gloves and the other relics found under Vindolanda are so well preserved is because they were sealed under a concrete floor constructed by the Romans around 120. Well protected in this undercroft, these artifacts went undamaged by the elements for nearly 2000 years.

What do you think of these Ancient Roman boxing gloves? It certainly doesn’t look like these relics from the early years of sport-fighting are the solution to MMA’s eye-poke problem…