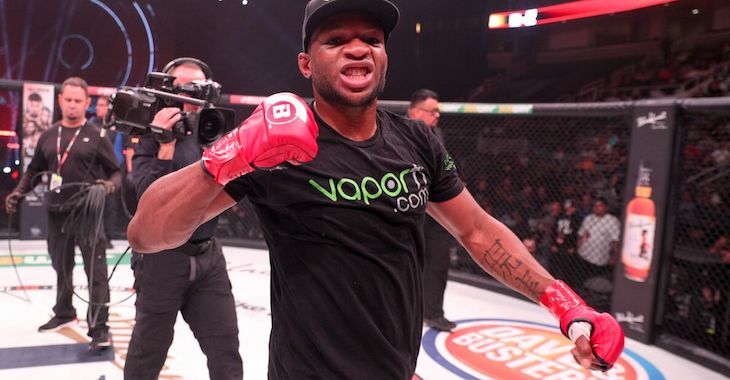 “Semtex” scored a brutal second-round knockout victory over “da Monsoon” after scoring a beautiful left hook that had Larkin out on his feet.

The welterweight standouts got heated at the Bellator 183 weigh ins on Friday, but according to Daley the beef with Larkin has since been squashed.

Here is what Daley said on the subject during the Bellator 183 post-fight press conference (via MMAJunkie).

“Every time I get a knockout I feel fantastic. Winning definitely beats losing. The last time I lost against Rory MacDonald, so, it’s fantastic. Lorenz, he was just in my changing room, he’s genuinely a nice guy. He said I got under his skin a bit, and he just wasn’t used to the whole trash-talking thing. He’s a top name. He’s beaten former UFC champions. He’s beaten some top guys. For me, it’s a massive, massive win.”

“He came back to the changing rooms, and we spoke a little bit,” Daley revealed. “He’s a cool guy. I don’t know why everyone gets so wound up. They know what (expletive) I’m going to do; I do it every time. I talk a bit of (expletive). I wind them up at the press conference or whatever. He just bit.”

Who do you want to see Paul Daley fight in his next Bellator appearance? Sound off PENN Nation!