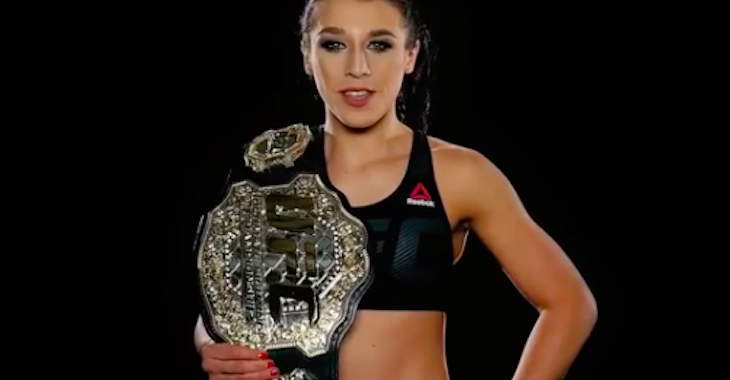 Joanna Jedrzejczyk is busy preparing to defend her strawweight title against Rose Namajunas at November’s UFC 217 event in New York.

If Joanna can emerge victorious at UFC 217 she will tie Ronda Rousey for the most women’s title defenses with six.

The UFC recently introduced a new women’s flyweight division to their roster which has left many fans believing that Joanna will eventually move up in weight and attempt to be the first woman to hold multiple titles.

If Joanna does opt to move up to flyweight, she will likely have to deal with former women’s bantamweight title challenger Valentina Shevchenko.

Shevchenko has defeated Joanna on three occasions in Muay Thai but the pair have never crossed paths in MMA.

Joanna spoke about the potential matchup with Ariel Helwani on The MMA Hour:

“I have a very good relationship with Valentina Shevchenko,” Joanna told Ariel Helwani on the latest episode of The MMA Hour.

“I don’t want to say I want to fight her, but we will see. I was talking a lot about the 125 division, but it was before I was working with Perfecting Athletes.

“Now I feel great. I feel healthy. I make my weight very easy, but who knows? This year I want to be focused on my strawweight belt, tie Ronda Rousey’s record of six title defenses and in March I want to fight one more time in the strawweight division and after that we will see.

“I may go up to the 125 division. It’s all about the right time and the right decision, so we will see.”

Would you like to see an MMA fight between Joanna and Valentina? Who do you think would win? Sound off Penn Nation!