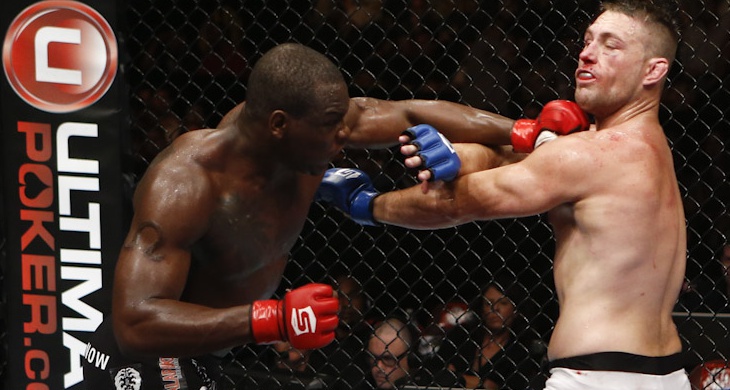 About a month ago OSP picked up a win over Rafael Cavalcante. This would be his 19th professional win. Obviously Saint Preux is anxious to get back in the cage.

“I get it, guys in my division are scared to fight me,” Saint Preux told MMAFighting.com, “I get that. I’m breaking people’s arms and choking people out with stuff they ain’t ever seen. But c’mon [UFC matchmaker] Joe [Silva] make someone man up and fight me.
“Gustafsson, Bader, Manuwa and Latifi don’t have fights lined up. I’d love to rematch Bader, because he’s a great fighter and he’s not afraid of anyone. If not those guys, how about Josh Barnett or Travis Browne? I know those guys in the heavyweight division aren’t afraid to throw down.”

Joey Zonar, OPS’s Manager and coach knows his decision win over Cavalcante was not a highlight reel in the making but says OSP sprained his ankle while throwing a kick in the early part of the 1st round. Ovince has been cleared by his Dr.and is ready to go.

“We asked for a fight within two weeks of his win over Feijao,” Zonar said, “and all we got from the UFC was, We’ll let you know when we have a fight.”

“I’m just going to keep training,” he said. “I didn’t get called about the Rashad fight, though it’s basically in my hometown of Immokalee and they knew I wanted that fight. I didn’t get offered the Lil’ Nog fight even though I’ve got a win over the guy he’s fighting now and fighting Lil’ Nog would be a dream fight for me. Now I see Corey Anderson has got a fight lined up and he just gifted a win over Tom Lawlor.”