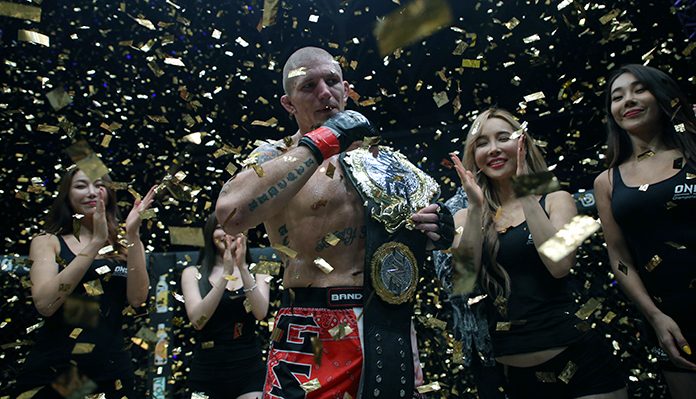 Former ONE welterweight champion Zebaztian Kadestam says he’s an improved fighter ahead of his imminent return to competition.

Kadestam will take on the unbeaten Gadjimurad Abdulaev at ONE: Unbreakable this Friday in Singapore. Abdulaev is replacing Kadestam’s originally slated opponent, Raimond Magomedaliev, on short notice, but the former champion is expecting a tough fight nonetheless.

“He competed on ONE Warrior Series, and he just took the guy down and tried to stay on top and ride it out on points,” Kadestam said during Monday’s ONE: Unbreakable Media Day, confessing that he doesn’t know much about his upcoming foe. “It’s not anything new for me.

“There wasn’t much to study,” Kadestam added. “I studied what I could. He looks like he prefers the ground.

“I think he’s going to come out strong and try to wrestle hard.”

This bout will Kadestam’s first since he surrendered the ONE welterweight title to Kiamrian Abbasov via unanimous decision in October of 2019.

Abbasov still holds the title, having most recently defended it with a come-from-behind knockout win over the formerly unbeaten James Nakashima.

Kadestam confesses he was very impressed by the champion’s resilience and heart in that fight.

“Abbasov showed heart,” he said of his former foe. “He got tagged in the beginning. He broke his nose, I believe. He showed the heart of a champion. He came through and got a nice finish. I enjoyed that fight.”

While Kadestam has plenty of respect for the champion, he’s determined to earn a shot at redemption and reclaim the title that was once his.

He’ll attempt to take the first step toward that end when he takes on Gadjimurad Abdulaev this Friday.

“We’ll see on Friday if [Abdulaev] has any tricks up his sleeve,” Kadestam said. “I have a few [tricks up my sleeve], so I’m ready.

“The journey [back to the title] starts on Friday. Don’t blink.”

Do you think Zebaztian Kadestam will get back to winning ways at ONE: Unbreakable?