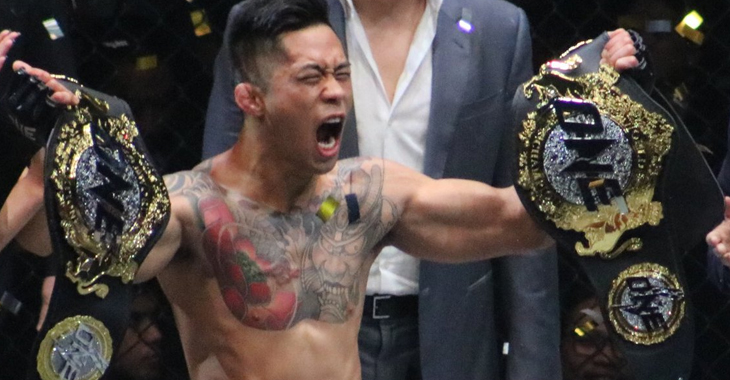 History was just made at ONE: Legends of the World, at the Mall of Asia Arena in Pasay City. ONE’s lightweight champion Eduard Folayang took on featherweight champion Martin Nguyen in an unprecedented champion versus champion battle for glory. In the second round, Nguyen landed a rocketing right hand to counter a spinning back kick that knocked out Folayang. Martin Nguyen is now ONE Championship’s featherweight and lightweight champion. Sorry, Conor McGregor. Nguyen can now call himself the ‘champ champ’ as well.

Eduard Folayang was on a tear at ONE Championship. He had been with the organization since their very first card in 2011. Since then, he climbed and climbed his way to the top, amassing the most wins in the organization’s history. Finally, Folayang got his crowning moment last year. In a fight for the ONE lightweight title, Folayang upset legend Shinya Aoki to become the new champion.

Before this history-making confrontation, Martin Nguyen stacked up first-round stoppage wins in four fights, including taking out the next young superstar, Christian Lee. His performances are what earned him a rematch against the last fighter to beat him, Marat Gafurov. Nguyen knocked him out in the second round back in August to become the new ONE featherweight champ. His latest win over Folyang puts him on a six-fight win streak and makes him the first simultaneous two-division champion in ONE’s history.

“When ONE Championship flew us to Netflix headquarters in L.A., that’s when Eduard [Folayang] had just won the world title and we just walked around Hollywood and spent five days together. From breakfast, lunch to dinner, it was me, Eduard, and Peter Davis, and we were just chilling out every day. Friendship grew and the respect came from there. After we came to our terms and agreements it’s just like any other fight. We said the things we had to say, we are martial artists at the end of the day, once all that was said and done. He just became an opponent in my eyes and we’re ready for another opponent. My ultimate goal was just to win a world championship title. Now I have the opportunity to win two and be the first in ONE history. The idea of becoming a two-time world champion is just so mesmerizing.” — Martin Nguyen speaking to Yahoo Sports earlier this month.

The ultimate battle of WORLD CHAMPION vs. WORLD CHAMPION. Who will make the best of it? #Manila #MartialArts pic.twitter.com/hjnjEJVT0x