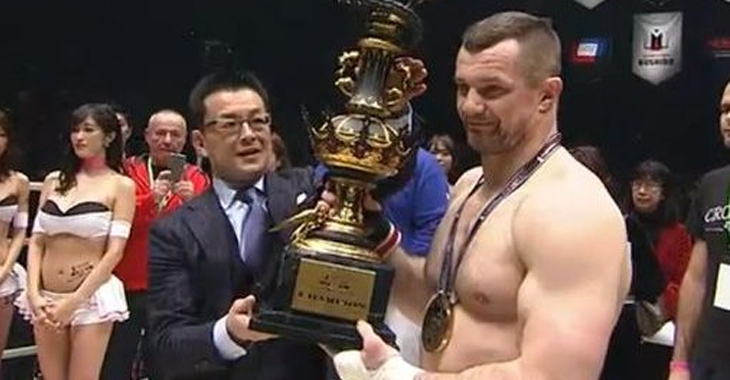 Mirko Cro Cop is one of the most incredible legends of this sport. After a startling 21-years involved in combat sports, his resume is insane. He has the most finishes in combined UFC, Pride, WEC, and Strikeforce history at 21, which is a finish for every year he’s been fighting. He’s the only fighter to win K-1, Pride and RIZIN grand prix tournaments. He’s fought your favorite fighters, he’s beat your favorite fighters, we could write a book on this man. We thought he had finally hung up the gloves, but RIZIN announced today that the Croatian kickboxing sensation is back.

RIZIN GP2016無差別級王者のミルコ選手が一年振りにRIZINのリングに帰還します。 引退までの残り数試合、最も愛する日本のファンの前で闘う事を決断しました。 最後まで勝負論の有る試合がしたいと言うのがミルコの希望です。 引退に向けて動き出すミルコの最終章に注目して下さい！ #mirkocrocop #RIZINFF #RIZIN2017 The RIZIN GP 2016 winner Mirko Crocop will be returning to the RIZIN ring after a year. He has decided to fight in front of his beloved Japanese fans a few more times before he retires. He would like to continue to face meaningful opponents until he hangs his gloves. Keep an eye out for Mirko’s final chapter.

“The RIZIN GP 2016 winner Mirko Cro Cop will be returning to the RIZIN ring after a year. He has decided to fight in front of his beloved Japanese fans a few more times before he retires. He would like to continue to face meaningful opponents until he hangs his gloves. Keep an eye out for Mirko’s final chapter.” — Noboyuki Sakakibara via his official Instagram.

One-by-one, Mirko Cro Cop finished all four of his opponents in the openweight grand prix in January of this year: Hyun Man Myung by submission, and Bellator light heavyweight Muhammed “King Mo” Lawal, RIZIN’s sumo Baruto, and Amir Aliakbari all by knockout. After the grueling tournament, Cro Cop announced his retirement on a seven-fight win streak, but left some leeway for a return provided proper rehabilitation of his many injuries. It looks like he was able to heal up and wants to give the fans more left leg cemetery in Japan.

“[The RIZIN openweight grand prix] was definitely my last tournament. I have health problems and this is definitely the end of my career. If necessary, one farewell match if I can rehabilitate knee which I have a big problem. Only, of course in Japan. I have to be smarter when it comes to my knee. Torn ligaments, the cartilage is destroyed. I went to the doctor once a week, after training and acupuncture. I never want to go through such hell. I gave my best. I know I’ve already announced the end, but this is definitely the end.” — Mirko Cro Cop speaking to Nova TV back in January.