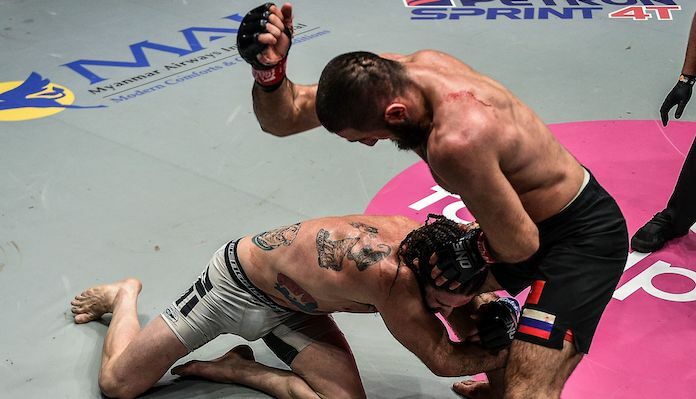 On Friday, ONE Championship returned to screens worldwide with ONE: Inside the Matrix 2 from the Singapore Indoor Arena.

The ONE Championship: Inside the Matrix 2 card was topped by a welterweight title fight between Kyrgyz champion Kiamrian Abbasov, making his first title defense, and unbeaten American challenger James Nakashima.

In the early going, this fight started to look like a blowout for Nakashima, who landed some key takedowns and bloodied the champion’s nose on the feet. In round four, however, Abbasov put a decisive end to things, putting his challenger down with a beautifully timed knee and follow-up punches.

This ONE Championship card was co-headlined by a lightweight scrap between top contenders Pieter Buist and Timofey Nastyukhin. Nastyukhin won this fight by decision, building on the momentum of his famous knockout win over Eddie Alvarez, and seemingly earning a crack at lightweight champ Christian Lee in the process.

See the full results of the card, along with highlights of each victory, below:

ONE Championship: Inside the Matrix 2 | Full Results and Highlights

Kiamrian Abbasov (c) def. James Nakashima by TKO at 3:37 of Round 4 – defended the ONE welterweight title

WHAT A COMEBACK! Kiamrian Abbasov 🇰🇬 retains the ONE Welterweight World Title with a fourth-round knockout of James Nakashima! #InsideTheMatrix2 #WeAreONE #ONEChampionship pic.twitter.com/K8G2U3Xyet

Yuya Wakamatsu def. Kim Kyu Sung by knockout at 1:46 of Round 1

Eko Roni Saputra def. Ramon Gonzales by submission (rear-naked choke) at 4:07 of Round 1

Meng Bo def. Priscilla Hertati Lumban Gaol by knockout at 1:26 of Round 1

What was your favorite moment from this action-packed ONE Championship card?