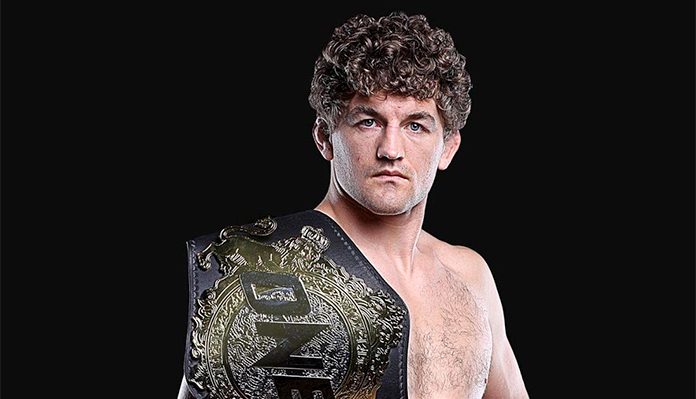 Ben Askren announced his retirement on Monday afternoon, and he’s been receiving love from the MMA community ever since. He even got a nice tribute from ONE Championship, the organization that famously traded him to the UFC for Demetrious “Mighty Mouse” Johnson in 2018.

See how ONE Championship sent Ben Askren off into retirement below:

“Truly ONE of a kind. Thanks for the memories, Ben Askren!” – ONE Championship on Twitter.

Ben Askren joined the ONE Championship roster after a lengthy and successful run with Bellator.

In his first ONE bout, he delivered a first-round submission over Bakhtiyar Abbasov. He was then granted a shot at the ONE welterweight title, which was owned by Japan’s Nobutatsu Suzuki at the time. Askren captured the belt with a submission in less than two minutes.

In his first ONE Championship welterweight title defense, Askren took on Brazilian veteran Luis Santos. Unfortunately, this bout ended with a no contest after an inadvertent eye-poke — but not before “Sapo” gave Askren some of the toughest tests of his career thus far.

He went on to defend the welterweight strap with Nikolay Aleksakhin, Agilan Thani and Zebaztian Kadestam — the latter of whom would subsequently embark on his own impressive run as ONE welterweight champion.

Askren’s last fight in the ONE cage occurred in 2017, when he stopped Japanese legend Shinya Aoki in less than a minute. This bout was originally expected to be his retirement fight, but that first retirement ended when he was traded to the UFC for Johnson.

Askren won his first bout in the UFC, defeating Robbie Lawler by submission, but lost his next two bouts, coming up short against Jorge Masvidal and Demian Maia.

While his UFC career didn’t go quite the way he envisioned, his time in ONE Championship remains an important and impressive piece of his legacy.