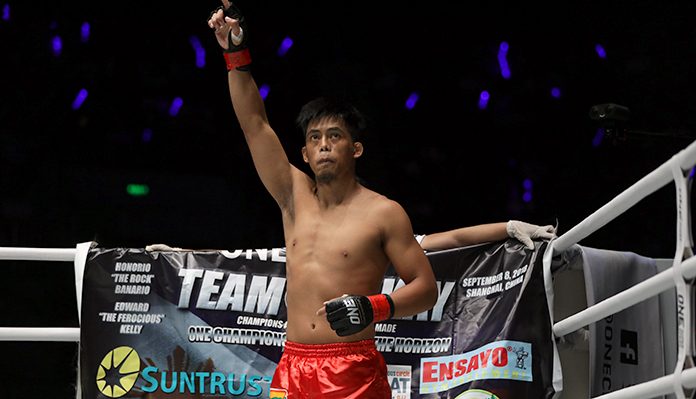 The two warriors met in the quarter-final round of the highly-anticipated ONE Lightweight World Grand Prix on the main card of ONE: Hero’s Ascent which took place last 25 January at the Mall of Asia Arena in Manila.

In the end, Tynanes defeated Banario, scoring a quick and dominant first-round technical knockout victory over the former ONE Featherweight World Champion.

Despite the loss, Banario feels as though Tynanes is not the same fighter that terrorized the lightweight division some years ago.

“I think he’s not as powerful as advertised. He’s not heavy on the ground when he comes to pin, but he positions himself really well,” Banario said in an interview with inquirer.com.

“He’s the same fighter who fought Folayang in 2012. He’s excellent, but may have already reached his full potential.”

Banario, a wushu champion like many of his Team Lakay brothers, looked to test Tynanes on the feet. He was able to land a few thudding shots but it had little or no effect on the well-conditioned Hawaiian athlete.

It didn’t take long for Tynanes to steamroll through Banario, driving him down to the mat with a single-leg.

On the ground, Tynanes effortlessly transitioned into side control. He then trapped Banario’s arms and quickly slid into the mounted crucifix position. Tynanes has utilized this maneuver in the past, punishing his opponents with his heavy top game.

With both of his arms incapacitated, Banario had no defense for the stream of elbows and fists that would come his way. Tynanes pounded on Banario relentlessly until the referee was forced to intervene and call a halt to the contest.

Still, despite getting dominated on the ground, Banario feels he could have done better if only he didn’t get caught in such a disadvantageous position.

“I think we’re even when it comes to jiu-jitsu. In my case, I got caught in a crucifix. He has a great ground game, but it can be escaped from,” Banario said

With the victory, Tynanes advances to the second-round of the ONE Lightweight World Grand Prix. He will take on the winner of the Eddie “The Underground” Alvarez and Timofey Nastyukhin bout scheduled for 31 March in Tokyo, Japan.

The reigning ONE Lightweight World Champion is Banario’s teammate Eduard “Landslide” Folayang. Tynanes met Folayang early in his career and scored an emphatic technical knockout victory over the Filipino veteran.

If Tyananes were to win the Grand Prix tournament, he may potentially face Folayang in a rematch, should Folayang still be champion by that time. If they do meet again, Banario thinks his Team Lakay brother will have the advantage this time around.

“He (Tynanes) barely landed a punch on the feet. Should he fight Eduard Folayang again we must focus on wrestling defense,” Banario concluded.