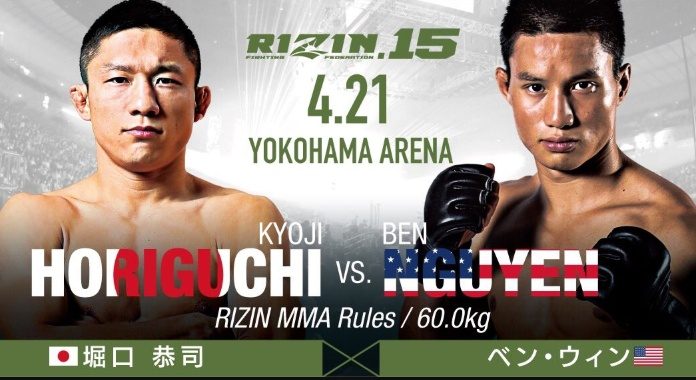 With each new year, Japan’s RIZIN Fighting Federation seems to continually step things up a notch with bigger and better shows. 2018 was no different.

RIZIN capped this past year off with the fantastic RIZIN 14 New Year’s Eve show which was headlined by a surprising exhibition boxing match that featured all-time boxing great Floyd Mayweather vs prodigy kickboxing star Tenshin Nasukawa.

Also on the card were two inaugural title bouts in the bantamweight and super atomweight divisions.

Both were very big fights for different reasons.

Now to kick things off in 2019 with RIZIN 15 on April 21 from the Yokohama Arena in Yokohama, Japan, we’ll get another new champion being crowned at light heavyweight as well as Horiguchi’s first fight since becoming champion as he welcomes a former UFC flyweight to RIZIN. It will be a non-title bout.

Here’s the card so far as announced at the RIZIN 15 announcement press conference.

With this light heavyweight title bout, we’ll be getting another cross-promotional battle as Muhammad “King Mo” Lawal represents Bellator. He also already holds a win over Jiri Prochazka from their first meeting in 2015.