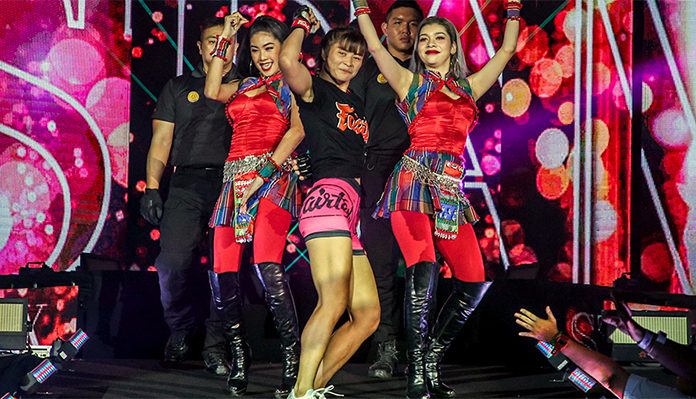 At just 21 years of age, Thai martial arts phenom Stamp Fairtex has done something that no one else in the history of ONE Championship has been able to do, and that’s become a two-sport champion within the Asia-based martial arts promotion.

And just recently at ONE: Dreams of Gold in Bangkok, she began her journey towards a third world championship in as many sports, defeating Indian prospect Asha “Knockout Queen” Roka via third-round submission in her return to mixed martial arts.

Already in ONE Championship’s halls of history, the young Thai star has the chance to add even more glory and prestige to her name, and it all started when she felt the need to learn her country’s national sport as a form of self-defense.

Financial problems weren’t really an issue for Stamp and her family, which isn’t the case for many professional martial artists.

Stamp grew up in the province of Rayong, a big city and known tourist spot in Thailand. There, her family was able to make a respectable living off farming rubber, durian, and rambutan.

But as much as the farmlands were part of Stamp’s youth, so was Muay Thai. Her father was a talented Muay Thai practitioner, and her uncle ran a family gym which became the training grounds for her relatives.

Still, it wasn’t as if she was born into the sport. 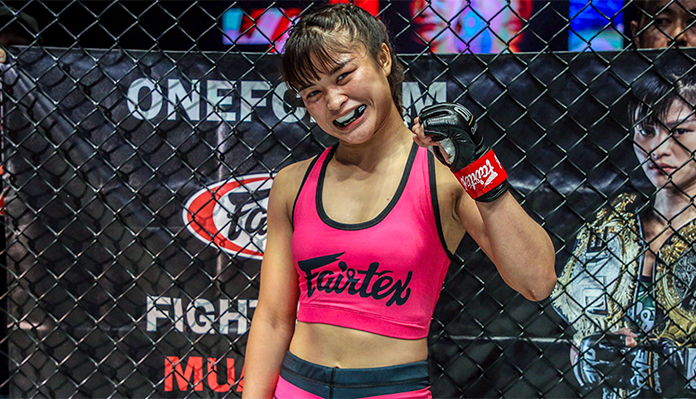 “I was just an ordinary girl, helping my parents on the fruit farms,” Stamp shared. “I went to a big school, which is quite famous. I liked P.E. and music classes.”

Her life in school, however, would serve as the spark that would get her into Muay Thai, but it would be more for protection, rather than leisure.

“I was bullied all the time. I always came back home from school with bruises here and there,” Stamp revealed. “Because my family had a training camp, I thought I could do something to fight back.”

Soon, the young Stamp found herself hooked to the sport and it was evident that she was indeed built for it. Stamp would find out, however, that even within the sport in which she found a calling, there were still more obstacles to face.

“The hardest thing was overcoming female stereotypes,” she stated. “In Thailand, female Muay Thai athletes were not very culturally accepted. Females are viewed as weak and are expected to act ladylike. Every female who became a Muay Thai athlete has her passion. They want to be recognized, but in fact, they are not accepted by society.”

Perception did change over time, and female Muay Thai competitors started to become more widely accepted. And with that, Stamp began to make a name for herself in the scene.

While Stamp was mainly a striking specialist with a 60-15-5 professional Muay Thai record before making her official ONE debut, it was her potential in mixed martial arts that essentially served as her ticket to the big show. 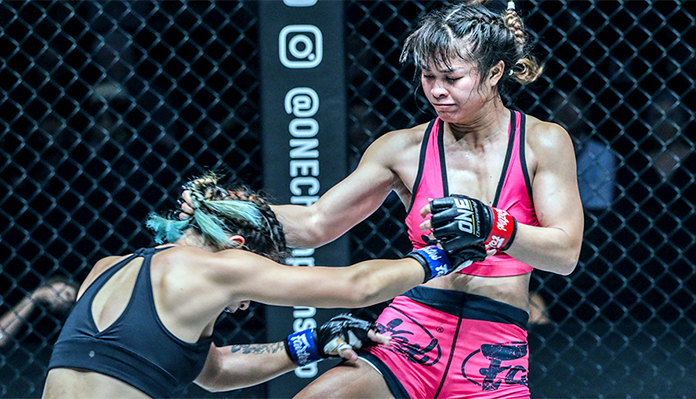 While training at the famed Fairtex Gym in Pattaya, Thailand, Stamp’s skills caught the attention of ONE Championship Vice President Rich Franklin and she earned a spot on the second edition of the ONE Warrior Series show.

After her impressive outing on the ONE Warrior Series card, Stamp found a way to return to her roots while still competing on the biggest martial arts stage in the world, thanks to the widely-successful ONE Super Series platform.

In her official ONE debut, Stamp was once again able to showcase the striking that made her an up-and-coming star. In what was by all accounts a trial by fire, Stamp’s first foray into the ONE ring was to challenge then-champion “The Killer Bee” Kai Ting Chuang for the ONE Atomweight Kickboxing World Championship.

Stamp immediately announced her arrival by neutralizing the dangerous Chuang en route to a unanimous decision victory and became just the second ONE Atomweight Kickboxing World Champion in front of her hometown fans in Bangkok.

As prestigious as that moment was for the young star, there was more to come.

In just her second appearance in a ONE ring, Stamp had the chance to make history by becoming the first and only two-sport champion in ONE and to become the inaugural ONE Atomweight Muay Thai World Champion. She did just that. 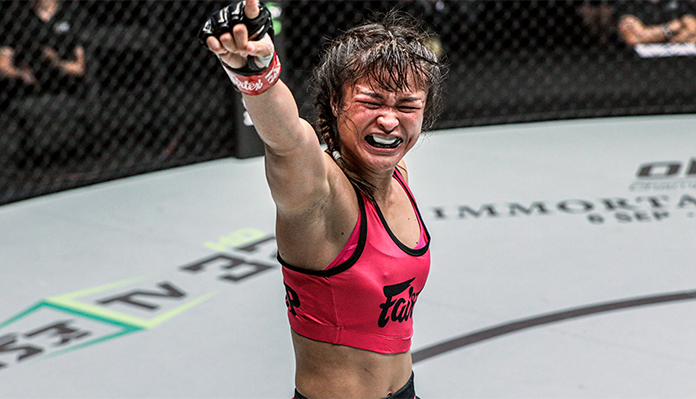 Against a very game opponent in American Janet “JT” Todd, Stamp showed the world just why she could be considered as one of the best female strikers in the game with a five-round unanimous decision win to add another belt to her growing collection.

Becoming champion is one thing, but staying as a champion is another, and in her first title defense of the Muay Thai crown, Stamp was tested like never before.

Facing off against a relative unknown in Australian star Alma Juniku, Stamp was pushed to the limit. The unassuming Aussie newcomer proved her mettle and gave the two-sport champion all she could handle. In the end, however, Stamp was able to pull out a razor-close decision to retain the title and cement her place as a top star in the company.

The question on everyone’s minds now was, after winning both the striking world titles in the atomweight division, would Stamp go for the mixed martial arts crown?

The Thai star made it clear that she was indeed coming for that ONE Women’s Atomweight World Championship in mixed martial arts.

“I do have plans of getting the third belt, the mixed martial arts World Championship,” she said.

“If I fight in mixed martial arts, I know that everyone will try to take me down and fight on the ground. I will have to try harder and harder to climb up and get some experience before I fight for the belt. If I win the belt, it will be my greatest achievement.” 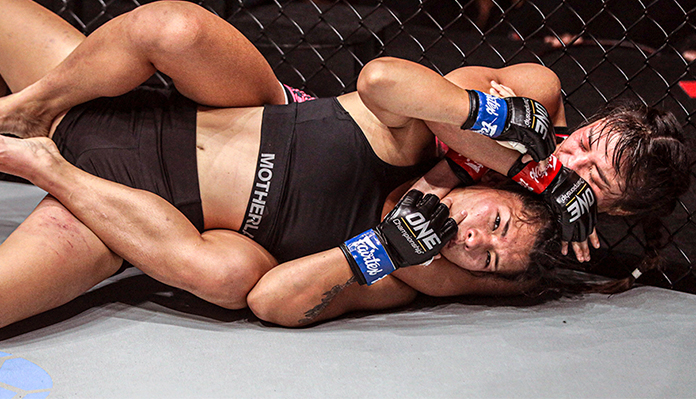 That journey to a third title began at ONE: Dreams of Gold last 16 August, when Stamp made her official mixed martial arts debut against Indian newcomer Asha Roka.

Under the bright lights, Stamp proved that she was more than just a striker as she dominated Roka on the ground on multiple occasions before securing a third-round rear-naked choke submission for her maiden mixed martial arts win, and the beginning of what could become a storied career in the sport.

Stamp’s career has all the potential to be long and prestigious, but for her, the motivation and the goal remains the same. It goes beyond winning gold.

“I hope that I can become an inspiration and a source of motivation to all the women and the little girls out there who are aspiring to succeed, not just in martial arts, but in anything that they wish to pursue,” she expressed.