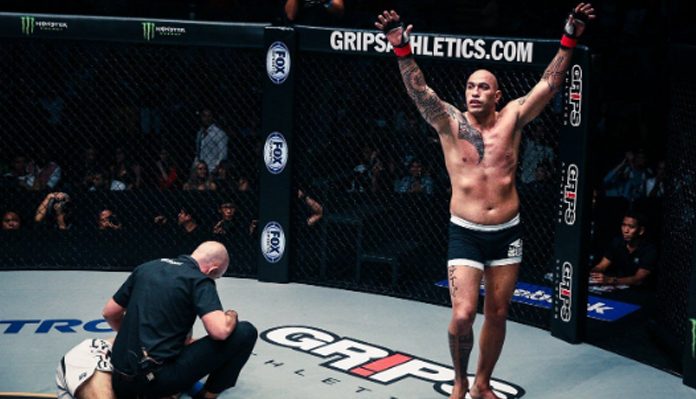 ONE: Conquest of Champions, which went down in Manila, The Philippines on Friday night (Friday morning in North America), did not disappoint. To the elation of the deafeningly loud crowd in attendance, two Filipinos left the arena with belts wrapped round their waists, as Brandon Vera sniped Mauro Cerilli to retain his ONE heavyweight title, and Eduard Folayang out-duelled Amir Khan to capture the vacant ONE lightweight strap.

Eduard Folayang battled Amir Khan in the card’s co-main event. While Singapore’s Khan enjoyed some success in the first frame, Folayang came alive in the second, and did not relent until the end of the fifth. The Filipino champion, who is now the first two-time titleholder in ONE lightweight history, punished his dangerous foe with a stunning breadth of spinning attacks — just what we’ve come to expect from the top fighters out of the belt-hoarding Team Lakay gym.

By the time the final bell chimed, there could be no other outcome than a unanimous decision win for the the Filipino hero. He’s now a strong 21-6 overall.

The Manila crowd seems to be enjoying this one. #ConquestOfChampions pic.twitter.com/lNhDuB4xb3

Brandon Vera returned to action in the ONE: Conquest of Champion’s main event. The UFC veteran had not competed in two years, having been busy with an acting role in The Philippines, but did not show any signs of ring rust.

Early in the first round, the Cage Warriors heavyweight champion Mauro Cerilli attempted to close the distance on the taller, longer ONE heavyweight king. Vera, however, stayed composed, and minutes into the first frame, caught his foe with a fade-away check left hook. In seconds, Cerilli was supine on the canvas, and the referee was halting the action to the roar of the passionate Manila crowd.

With this gorgeous, one-punch KO win, Brandon Vera improves to 16-7.

After 2 years away from the sport, Brandon "The Truth" Vera makes a triumphant return to the cage, knocking out recent Cage Warriors HW champ Mauro Cerilli in 64 seconds. #ConquestOfChampions pic.twitter.com/S1eLCiXaha

Who do you want to see Brandon Vera and Eduard Folayang fight next?