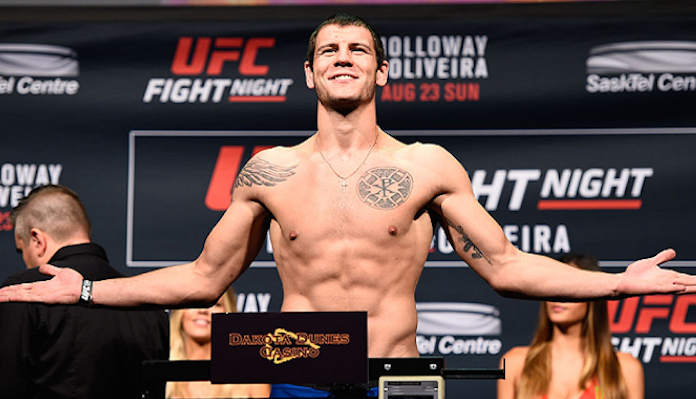 Shortly after his UFC 206 submission loss to Misha Cirkunov, Ukrainian light heavyweight talent Nikita Krylov parted ways with the UFC. Given Krylov’s history of delivering incredible finishes in the Octagon, and his commendable 6-3 Octagon record, the UFC received quite a bit of flack for letting him go.

The good news is that it sounds like he could be back in the Octagon quite soon.

According to a report from MMA Team Dagestan on Twitter, Krylov is in talks with the UFC surrounding an Octagon return — potentially when the UFC debuts in Moscow this September 15.

ESPN’s Chamatkar Sandhu was also able to verify that there have been talks between Krylov and the UFC.

I followed up on this report regarding Nikita Krylov. I've spoken to FNG officials who tell me he's currently in negotiations to re-sign with the UFC. Would make a ton of sense to have him feature on the Moscow card on September 15th. https://t.co/WErPOUXGCv

“I followed up on this report regarding Nikita Krylov,” Sandhu said in a Tweet. “I’ve spoken to [Fight Nights Global] officials who tell me he’s currently in negotiations to re-sign with the UFC. Would make a ton of sense to have him feature on the Moscow card on September 15th.”

Nikita Krylov is currently a strong 24-5 overall. Who would you like to see him fight in his potential return to the Octagon?