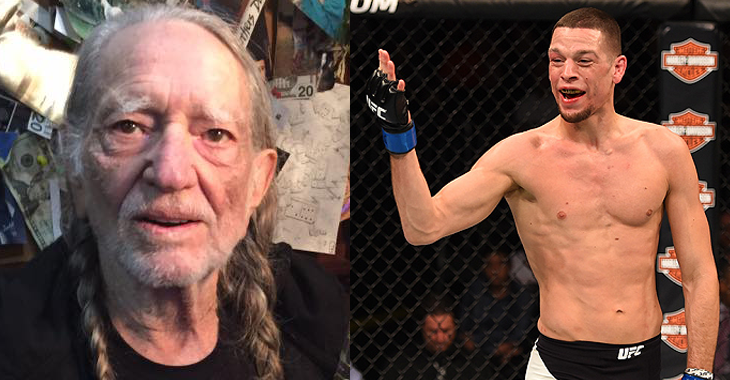 What do Willie Nelson, Nick, and Nate Diaz all have in common?

They are all legends for one, but another common interest among the three men is their admiration for marijuana. Recently the Diaz brothers rolled out their line of PreRoll marijuana cigarettes with California Finest, being made available to “qualified medical patients only.”

Nelson was seen on the California Finest social media pages holding up Nick and Nate’s line of medical marijuana cigarettes.

@natediaz209 Energy or @nickdiaz209 Recovery? That is the question! Both is the answer!🙏💨👊🏼💨@willienelsonofficial #preroll #prerolls #prerolled #californiafinest420 #willienelson

Nick and Nate have been open advocates of marijuana. Nate Diaz stirred up the pot after his last fight at UFC 202 against Conor McGregor where he stated he was smoking a CBD oil vape pen during the post-fight press conference. With the action taking place after the fight, the Nevada State Athletic Commission and the U.S. Anti-Doping agency (USADA) did not enforce any punishable actions. However, USADA did give Nate a public warning for his admitted use of the specified substance. Like older brother Nick, Nate has been waiting for a big fight that will take an opponent with a large draw and one that will offer him a big payout as well.

Nick recently completed an 18-month suspension for testing positive for marijuana and is eligible to compete in the UFC once again. However, the elder Diaz brother is holding out for the right offer from the UFC both with an opponent and with the right financial package. Nick Diaz last fought Anderson Silva at UFC 183 back in January 2015 where Silva initially was given the decision win after five rounds of combat. The win was later overturned to a no-contest after Silva tested positive for multiple banned substances including drostanolone metabolites and androstane while Diaz tested positive for marijuana metabolites and both athletes were issued suspensions.