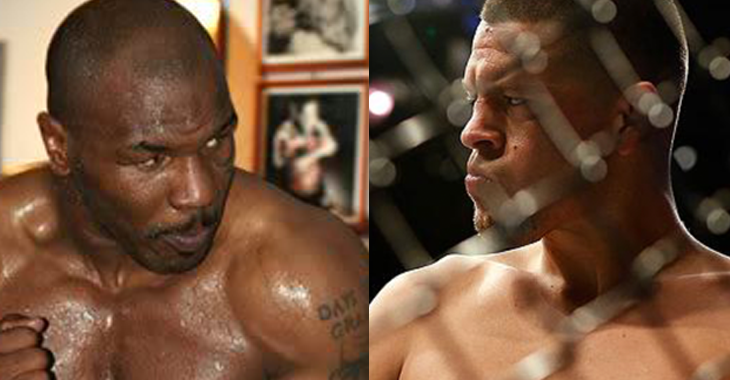 You know you have made it when boxing icon Mike Tyson claims you are the “baddest man on the planet.”

Following Nate Diaz’s rise to the top of the UFC’s payscale in his last two fights against UFC featherweight champion Conor McGregor, the youngest boxer to ever win the WBA, WBC, and IBF heavyweight titles came out with huge praise for the Stockton fighter.

Tyson posted a photo of Diaz wearing some Tyson gear and said the following in his caption:
“We see you @natediaz209
#BaddestManOnThePlanet to #AmerikazMostWanted
#BrooklynToStockton running the game 👊🏽”

Tyson was just 20-years-old when he won the three world heavyweight titles and was one of the most feared boxers who had more than devastating knockout power. Tyson’s highlights are timeless and now at the age of 50, the former champion has taken to the big screen making classic appearances in movies such as the “Hangover” and is currently doing a live standup comedy show at Brad Garrett’s Comedy Club at the MGM Grand in Las Vegas where Tyson entertains his audience with “tales of victory, tragedy and redemption.”

While Nate Diaz is coming off a majority decision loss to Conor McGregor in their rematch at UFC 202, the scrapper from Stockton feels that he is 2-0 against the Irishman and is just waiting for their trilogy fight to put their rivalry to an end, unless another big money fight is offered to him.

With earning an estimated $13 million in his UFC 202 fight with McGregor, it is obvious why Nate is in no hurry to get back in the Octagon. With earning the third highest disclosed fight purse in the UFC’s history right behind Conor McGregor and Brock Lesnar respectively, Nate Diaz is on a whole new level now.

Do you agree with Mike Tyson that Nate Diaz is the “baddest man on the planet”? Sound of Nate Diaz fans and let the world know why Nate has earned the respect of people from around the world!