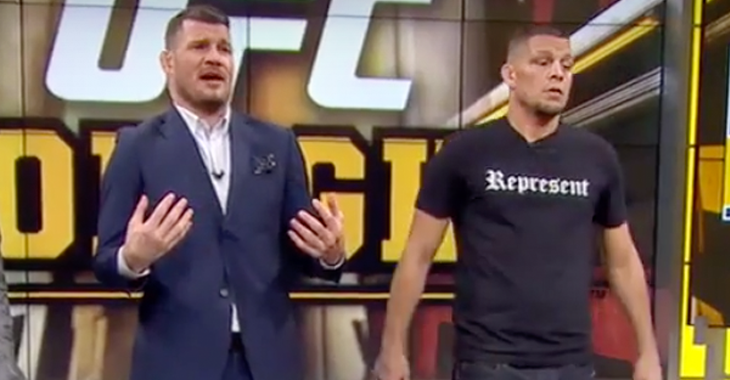 Bisping took to twitter to respond to the elder Diaz brother and added to it by throwing an insult at the younger Diaz who was had a fight with UFC featherweight champion Conor McGregor the following week saying, “I’d of thought @nickdiaz209 would be more concerned about the beating his bro is gonna get next week, rather than looking for his own.”

Well, after submitting McGregor in the second round of their fight, Nate Diaz appeared on Wednesday’s episode of UFC Tonight where Michael Bisping was a guest host on the show.

Things were not as awkward or tense as you would think knowing the recent backstory between the Diaz brothers and Bisping. However, Nate did get in his shots on Bisping as the talk came up of Nick coming back to fight after his suspension with the possibility of facing “The Count.”

A fellow host of UFC Tonight, Karyn Bryant asked Nate if he is saving a big fight with former welterweight champion Georges St-Pierre for his older brother Nick.

“Those are Nick’s fights,” Nate said as Bisping interrupted him and said, “Maybe he wants to fight me? Just throwing it out there.”

Diaz then says, “I think he’s looking for the pound-for-pound best fighter,” implying that Bisping was not in the caliber qualified to get a fight with his older brother.

The segment ends with Diaz questioning if Bisping can make 170-pounds as Nick has fought at both welterweight and middleweight. Bisping tells Diaz, “Hey, he did his last fight at 185. My leg weighs 170!”