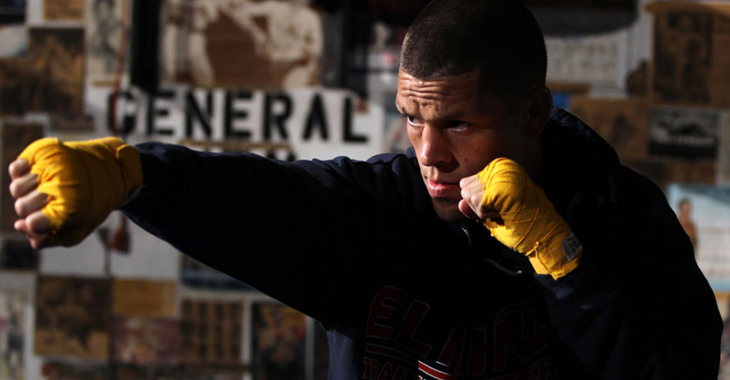 Nate Diaz is not fond of some of those in the boxing community that have been criticizing him. Diaz says many in the other world of combat sports has very little knowledge about mixed martial arts and what he could do to them in the boxing ring.

“I see a lot of boxers stating their opinions, which is the most irritating,” Diaz told Rolling Stone. “They’re stating their opinion on what’s what. All those boxers who are talking all this shit on me, on my skills in the ring and in the cage, too – I’ll whoop those boxers’ asses at boxing. I’ve sparred in pro boxing gyms. I would have already been a pro boxer if I wasn’t locked in contracts forever. I would have been boxing. I’d fucking do that shit.”

One former world champion boxer, in particular, Andre Berto predicted that Conor McGregor would finish Diaz in the first round of their fight at UFC 196 and Nate did not take kindly to the claim.

“Now I have boxers stating their opinions about how great they would have been. They know all about what we do with our hands?” he said. “It irritates me when I hear all these guys with their criticism. Especially like Andre Berto. I’m like, ‘You obviously don’t watch the sport or know shit.’ I don’t criticise your boxing skills, so stay out of my own.”

How do you think Nate Diaz would do in the boxing ring? Is this something that you would like to see Diaz do in the future?