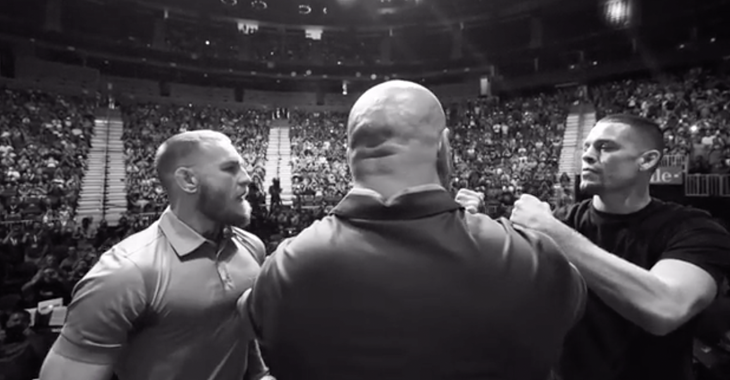 The fire between Conor McGregor and Nate Diaz seems to have recently been reignited.

During his pay-per-view interview held over the weekend, “The Notorious” dug into Diaz, saying that he lost all respect for the Stockton scrapper, calling him a “f***ing bitch” for the way he interacted with Floyd Mayweather over a FaceTime call. “When he had that video call, he should’ve been on the other end of that line, and when Floyd was saying ‘you made McGregor tapout,’ he’s like, ‘yeah I did,’ and Floyd is saying, ‘I’m going to finish the job’, he should’ve said: ‘shut your f***ing mouth or I’ll strangle you too,’ and then post that everywhere,” McGregor stated. “And then all of a sudden, it would’ve been like, f**k Floyd. It would’ve been me and Nate again.

Diaz, took to twitter following McGregor’s interview where he posted a short and sweet tweet that didn’t mention McGregor’s name, but surely is aimed at his Irish rival.

Although McGregor stated that Diaz isn’t the first fighter on his priority list with Floyd Mayweather being the only fight he is looking at next, he did state that the trilogy with the Stockton scrapper will eventually take place.

Diaz has also claimed that he is looking to get into the boxing ring as he feels the UFC has put him “on the shelf” and that no other big names in the UFC want to step up and fight him.

How do you see the third fight going down between Nate Diaz and Conor McGregor? Sound off in the comment section!