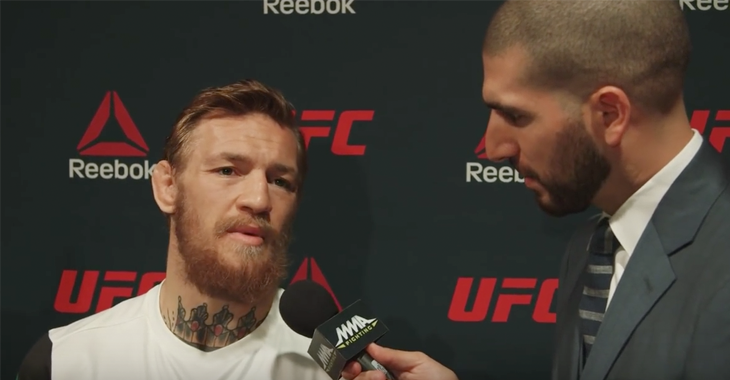 If you think that Conor McGregor needs to fight in the UFC to make money, think again.

The savvy businessman is part of something quite clever that his die-hard fans will surely want to be a part of.

MMA journalist Ariel Helwani will interview the UFC lightweight champion in a lengthy feature that will be streamed live that viewers can tune in on, for a price. NotoriousLive.tv has information on the paid streaming event featuring “The Notorious” Conor McGregor where you will get to “hear his life story unscripted for the first time anywhere in the world. From nothing – To something – To Everything.”

In a World Exclusive event, the notorious Conor McGregor will be live at “An Experience With Conor McGregor” in Manchester, UK. For the first time anywhere in the world, Conor will talk about his life and his career in the longest unscripted interview seen to date, with highly respected interviewer Ariel Helwani. This is your chance to be there, watch the show live and listen to Conor’s story from the comfort of your own home.

The cost of the streaming event is £3.99, which is just under five U.S. dollars.

Conor McGregor last fought at UFC 205 in November where he became the first fighter in history to be a simultaneous two-division UFC champion. McGregor has since relinquished the featherweight title and remains the undisputed UFC lightweight champion of the world.

Will you dish out a few bucks to hear Conor McGregor speak with Ariel Helwani about his story? Let’s hear see what the fans have to say about this event in the comment section!