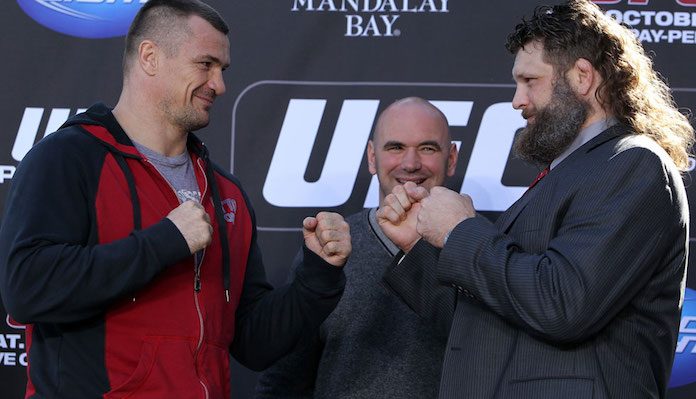 Earlier this week, it was announced that former UFC heavyweights Mirko “Cro Cop” Filipovic and Roy Nelson will collide at Bellator 200 this May 25. The bout will be a rematch of a 2011 fight, which Nelson won via third-round TKO.

Ahead of this fight, Nelson has mentioned Cro Cop’s previous brush with the United States Anti-Doping Agency, and wonders if the MMA legend might still be using “special supplements” – though he doesn’t really care one way or the other.

“I think Cro Cop’s definitely always improving with age, but I think he’s back on the special supplements, better supplements than usual,” Nelson told MMAJunkie. “Throughout my whole fight career, the only reason people want to fight me or have a chance to beat me, is if they get something. It’s something I just know that everybody is just on it. It’s one of those things where it’s an uphill battle. If you can help prevent it, cool. But at the end of the day I just go out there and fight whoever they want me to fight.”

It did not take long for Cro Cop to respond to this comment from Nelson.

“Dear Roy Nelson,” Cro Cop said in his post. “You don’t have to worry that i’m using any ‘special supplements’ as you claim.the only ‘special supplements’ i’m using is 2 hard and bloody trainings per day, five days a week.and i will be tested, like all others, during preparations for the fight and before and right after the fight.so you can be calm.and start thinking of some good excuse after i beat up your fat disrespectful ass, you have enough time to may 25.and do me a favour please, and shave that disgusting beard, look like professional fighter and show respect to your opponent.good luck!”

What do you think of this back and forth between the two fighters?