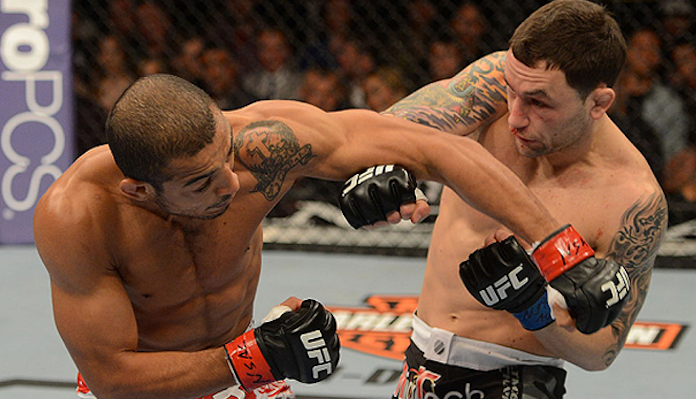 If things had gone according to the original plan, Frankie Edgar would have battled UFC featherweight champion Max Holloway in the main event of UFC 222. Regrettably, Holloway was forced out of this fight with an injury, which left Edgar in a short-notice, non-title fight with Brian Ortega – a fight he would lose by first-round knockout.

In the opinion of former UFC featherweight champion Jose Aldo, who has defeated Edgar twice, Edgar made the wrong choice by accepting a short-notice fight with Ortega.

“It’s a new generation that’s coming in,” Aldo told Brazil’s “Giro Combate” show (h/t MMAJunkie.com. “Age comes for everyone, and it’s normal to have this sort of rotation. To me, it wasn’t [surprising]. I just thought it was a mistake on Edgar’s end to fight [Ortega], who’s a very tough guy. He would have fought for the title, risked that and lost. Now he’s all the way back there again.”

“I think that was his biggest mistake. But I wasn’t surprised with the loss. That’s part of it. When you go in there, anyone can come out victorious, whether it’s via knockout or points, and that’s part of fighting.”

Aldo also gave his assessment of a possible Holloway vs. Ortega title fight.

“It’s a very even fight, I think” Aldo said. “Both have very similar reaches. In the striking department, too, I don’t see any of them as a specialist. The one specialty I see is Ortega’s guillotine, which is very strong.

“But Max won’t take him down. He’ll stand. So the fight will be decided on the feet.”

Whatever the case, Aldo understands the most favorable outcome for him would be an Ortega win, given that he’s lost to Holloway twice previously.

“For me, a better scenario would be for Brian to win,” Aldo said. “Because this way I know I have big chances of fighting for the title again.”

What do you think of Jose Aldo’s assessment of the situation?