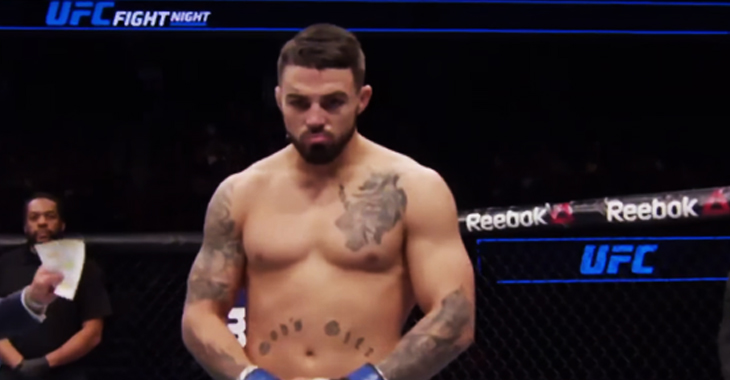 This December 16, on the UFC on Fox 26 broadcast, rising welterweight contender “Platinum” Mike Perry will face the toughest test of his career thus far, as he battles Argentinian knockout artist Santiago Ponzinibbio. Though Perry has never encountered Ponzinibbio before, he still considers this fight something of a redemption story. Why? Because Ponzinibbio recently beat Gunnar Nelson, who recently beat Alan Jouban, who is in turn the only man Perry has lost to.

Perry explained this feeling in a Facebook live interview over the weekend:

“I seen that fight with Gunnar Nelson and it’s just another blessing, man,” Perry said during a Facebook Live interview (h/t MMAMania). “I guess I love that word, huh? It’s just a true thing that so many good things happen to me. It’s the fight I want. I got a game opponent that steps forward. We all know I come forward. I come to fight. I’m down to take one or two just to land one good one. Santiago [Ponzinibbio] is going to move forward and I’m going to hit him and we’ll see what happens when that happens. It’s kind of redemption for me to beat the guy, who beat the guy, who beat the guy.”

Since losing a decision to Alan Jouban in December of 2016, Mike Perry has rebounded with violent knockouts of Jake Ellenberger, who he put down with an elbow, and Alex Reyes, who he stopped with a knee.

Ponzinibbio, meanwhile, recently extended his win-streak to five-straight by knocking out Nelson. This KO was preceded by defeats of Nordine Taleb, Zak Cummings, Court McGee and Andreas Stahl.

Who do you think wins this UFC on Fox 26 showdown between “Platinum” Mike Perry and Santiago Ponzinibbio? Where do you think the winner will stand in the UFC welterweight division?