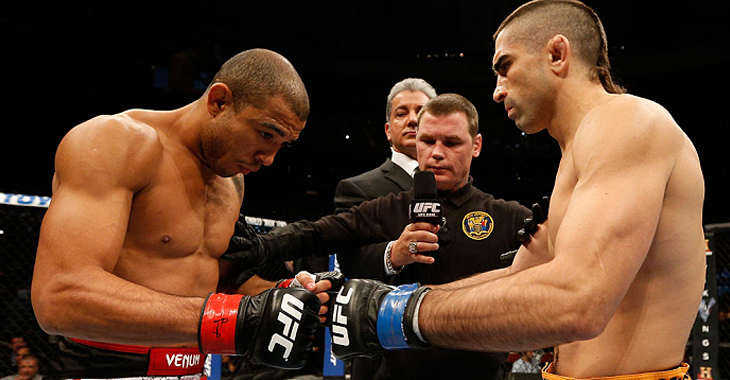 The octagon will return to Winnipeg, Manitoba, Canada on December 16 for the promotions UFC on FOX 26 fight card.

The fight card is already beginning to take shape with numerous high profile fights recently being made official by the promotion.

The UFC on FOX 26 event will be headlined by a welterweight scrap between former division champion Robbie Lawler squaring off with former lightweight champion Rafael dos Anjos.

UFC President Dana White has already stated that the winner of the “Ruthless” vs “RDA” fight will get the next shot at current UFC welterweight champion Tyron Woodley.

Robbie Lawler was last seen in action at July’s UFC 214 event where he scored a unanimous decision victory over a very game Donald “Cowboy” Cerrone. Lawler has won six of his past seven fights overall with his lone setback in that time coming to Tyron Woodley at UFC 201.

Meanwhile, Rafael dos Anjos was most recently competed at UFC 215 in September where he scored a first-round submission victory over Neil Magny. “RDA” has gone 2-0 since moving up to the UFC’s 170-pound weight class.

In the co-main event of the evening, former UFC featherweight champion Jose Aldo will look to get back in the win column when he rematches perennial contender Ricardo Lamas.

Aldo and Lamas first met at UFC 169 in February of 2014, with the Brazilian emerging victorious by way of a five-round unanimous judges decision.

Jose Aldo surrendered his featherweight gold to Max Holloway in his last octagon appearance at June’s UFC 212 event by way of third-round TKO.

If that wasn’t enough to get you motivated, welterweight sluggers Mike Perry and Santiago Ponzinibbio will also be throwing down at the now highly anticipated December 16 event.

The current UFC on FOX 26 lineup looks as follows:

What do you think of the current UFC on FOX 26 lineup? Stacked right?