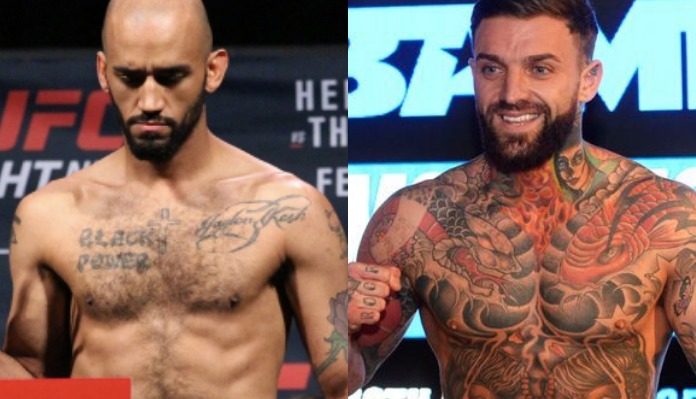 At UFC 225, Mike Jackson picked up his first UFC win, authoring a lopsided decision defeat over former pro wrestler CM Punk. Unfortunately for Jackson, the win didn’t go over well with UFC President Dana White, who doesn’t seem to have any interest in keeping him around.

“I don’t know what that guy did for a living before we gave him the shot, but whatever it was, he needs to go back and do that again,” White said of Jackson post-fight. “He’s 0-2 as far as I’m concerned.”

While it’s not official just yet, this would seem to imply that Jackson is now a free agent. If he is, it doesn’t look like he’ll have any trouble finding a home.

Earlier this week, the 1-0 welterweight was called out by Aaron Chalmers, a former star of the reality show Georgie Shore, and now a 4-0 mixed martial artist under the Bellator banner.

“We have asked for the Jackson fight,” Chalmers said in a Tweet. “There is a guy who is 5-1 in Bellator who we have also asked for next, so let’s see.”

“If you want it [Mike Jackson] then let’s have it,” Chalmers added in a second Tweet.

Thee Tweets then prompted a response from Jackson:

“You messaged me first you muppet,” Chalmers replied.

Jackson then fired back again:

Oh, so that's what we're doing? Did you not mention my name first? "We have asked for the Jackson fight…" And "muppet"? Is that supposed to offend me? https://t.co/2I0aCKhiPx

“Oh, so that’s what we’re doing?” he said. “Did you not mention my name first? ‘We have asked for the Jackson fight…’ And ‘muppet’? Is that supposed to offend me?”

“I said I’ve asked for the fight you tweeted me so I replied let’s do it?” Chalmers replied. “I thought you had some intelligence to put 2 tweets together.”

“When Michael Jackson pretends to want it but then changes his mind,” Chalmers added in a followup Tweet.

Now, I have the British wankas coming at me… pic.twitter.com/FyWAcDpIJF

“Now, I have the British wankas coming at me,” Jackson said in a final Tweet, temporarily ending the exchange.

Would you be interested in a fight between Mike Jackson and Aaron Chalmers under the Bellator banner?