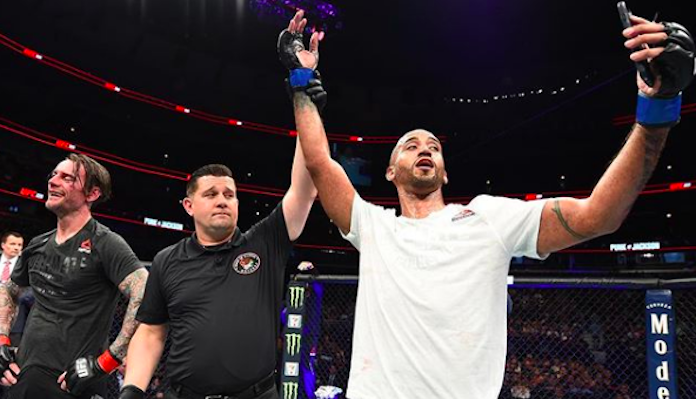 Last night, in the opening bout of the UFC 225 main card, Mike “The Truth” Jackson picked up a decisive decision win over former pro wrestler CM Punk. He did not, however, impress UFC President Dana White in doing so.

“I wouldn’t put that kid in the Contender Series,” White said of Jackson post-fight (via MMAjunkie.com)

“[Punk] got clipped a lot in that fight, and it looked like he was hurt,” White continued. “Michael Jackson I’m not happy with. This guy was acting like a goofball tonight. You get this opportunity to fight CM Punk, and you’re doing, like, bolo punches to the body on top. Never looked like he was trying to finish the fight ever. Looked like he could have finished the fight a few times. Never tried.

“I don’t know what that guy did for a living before we gave him the shot, but whatever it was, he needs to go back and do that again. He’s 0-2 as far as I’m concerned.”

Having heard White’s criticisms, Jackson took to Twitter to defend his performance.

I’m legit confused here. I’m trying to figure out how I was “cocky” & “taunting”?! I’m sorry, I didn’t knock out Phil, dude is hella tough. And I didn’t want to get caught with some dumb shit. pic.twitter.com/ucCb0y8HwT

“I’m legit confused here. I’m trying to figure out how I was ‘cocky’ & ‘taunting’?” he said. “I’m sorry, I didn’t knock out Phil, dude is hella tough. And I didn’t want to get caught with some dumb shit.”

Given that White feels that Jackson, the fight’s winner, should hang up the gloves, it should come as no surprise that he thinks CM Punk should give up on his MMA dreams too.

What do you think the future holds for Mike Jackson and CM Punk after their fight at UFC 225?