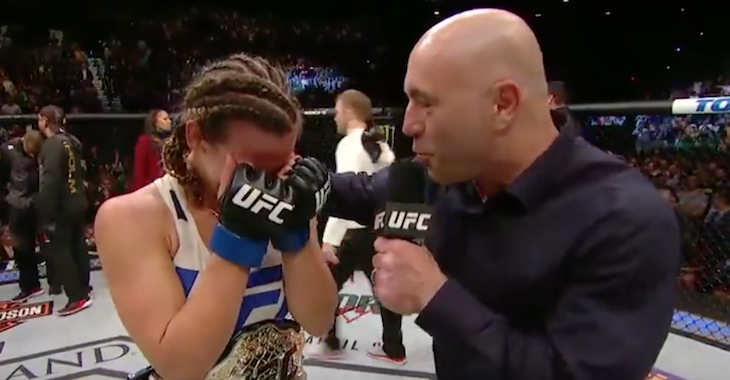 With female athletes this is an age old question that always comes up.  When are you having a baby? Will you retire after having a baby? How long ’till you’re able to compete again? Etc.. The list goes on forever and sometimes it can even be used to troll the best of them.
Tate and Rousey will try to make each other miserable via the press and Tate got the first shot off.

“I know Ronda’s not slated to come back until November and that’s kind of a long time to just sit and be idle. Now that I’m the champion I feel like I have unlimited energy. I don’t even know what she’s thinking right now. It seems like her motivation to stick around was to have Travis Browne’s baby, so… I don’t know. That doesn’t sound like a very motivated comeback. Every time I’ve ever lost my motivation was to get back up on the horse and fight someone again and work my way back to the top.”

Dana White has said that Rousey is next in line for the title shot especially since she beat Tate twice by submission already, but since losing to Rousey a second time at UFC 168 Tate has been on a five fight winning streak.

Will the third fight go any different now that Tate has the confidence and the belt?