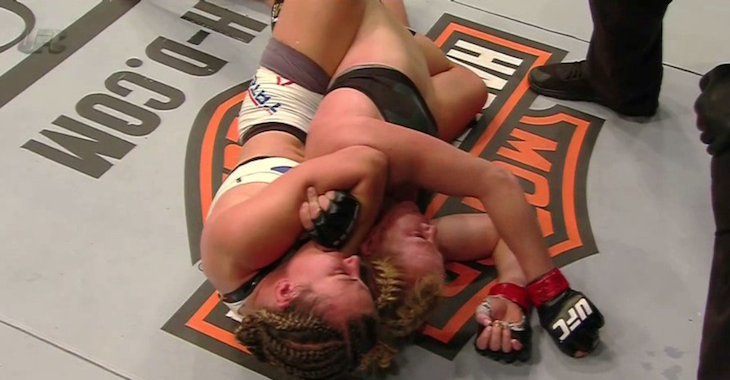 Talk about a deja vu.

It looks like UFC women’s bantamweight champion Miesha Tate and former champion Holly Holm have previously gotten into the position where Tate ultimately put Holm to sleep to secure her first UFC title.

Oddly, in a scene filmed for the movie “Fight Valley,” Holm and Tate are seen in the same position where Tate has Holm’s back and Holm flips her to reverse the position. It didn’t work out as well in their title fight as Tate secured a hook bringing Holm down to the mat with her and choked her unconscious.

By no means do we think that the title fight at UFC 196 was rehearsed, but how odd is the situation? Both Holm and Tate will surely never be able to watch the movie that is set to come out in April of this year in the same light after their tested championship fight nearly went the distance.

Here is the “Fight Valley” storyline via IMDB:

“When Tory Coro turns up dead, the neighborhood turns up silent. Rumor has it she became yet another victim of the small town known as FIGHT VALLEY. Tory’s sister Windsor moves to town to begin her own investigation on her sister’s mysterious death after weeks of no leads from the police. She’s quick to learn that Tory fought for money to make ends meet. If girl-next-door Windsor is going to make her way into FIGHT VALLEY to find the truth about Tory, she’s going to have to fight her way in. “Jabs” (Miesha Tate) swore she would never throw a punch in the Valley again. Jabs now finds herself training Windsor to survive the painful, unexpected path she’s about to take. Every corner. Every alley. Every doorway. She must follow the last footsteps of her sister in order to come face-to-face with Tory’s killer in FIGHT VALLEY.”