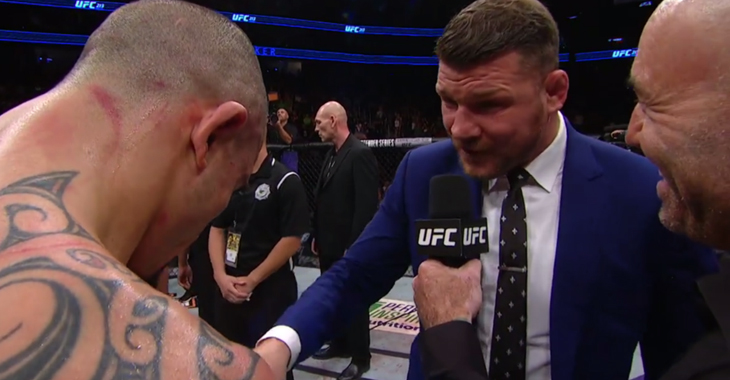 The UFC is coming back to Australia in February for UFC 221. According to a report by Perth Now, Robert Whittaker is scheduled to appear, which definitely makes sense for the hard-hitting Aussie. It was natural to assume that UFC interim middleweight champ Whittaker and whoever comes out the actual middleweight champion at UFC 217, would attempt to unify the titles at UFC 221. However, Michael Bisping put a cork in those plans if he’s still got the strap after this Saturday.

“Yeah, yeah [UFC 221 on February 11th is a quick turnaround]. I’m not awfully keen on fighting down in Australia. I mean, my wife’s Australian. I’ve fought in Australia three or four times already from one career. My next fight, if I have any say in it, is going to be in Manchester. Obviously, I don’t own the UFC, but If I beat Georges [St-Pierre] I’d like to think I still get a bit of say in it. I’d like that to be in Manchester, but we’ll see.”

“Of course it makes sense, Robert [Whittaker] is the interim champion — which is bullsh-t, it’s not worth the leverage its printed on. There’s no need for that but whatever, they got to sell pay-per-views. Perth, western Australia, just recently allowed the use of the cage, Octagon or whatever you want to call it, in Australia. So, it makes sense they’re going to put on an event down there.  There’s a huge UFC following down there. It makes sense. It doesn’t necessarily make sense if I don’t win this fight [against Georges St-Pierre] though. So, we’ll see.” — Michael Bisping speaking to Luke Thomas on Sirius XM Radio.

There have been four reported dates for UFC’s early 2016 schedule so far, one of which has already been confirmed as incorrect. The next alleged date for the UFC after 221 is March 3rd. No telling when the UFC could make it back to Manchester, but that’s the setting Michael Bisping eyes his next fight, whether that be against Robert Whittaker or not. But first, Bisping is right, he has to get past Georges St-Pierre at UFC 217 first.