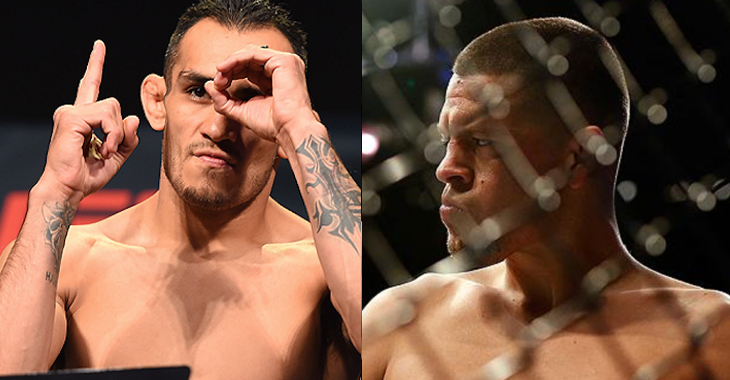 Conor McGregor has now taken the role of Shao Kahn from Mortal Kombat. He just sits back and watches the battles play out until he finally decides one is worthy enough to fight him. Of course, the only name that has seemed close according to rumors, reports and wallets was Nate Diaz. That was, until Tony Ferguson became the interim lightweight champion. Dana White said he and McGregor would be the next fight. Both Ferguson and Diaz are rangy, durable fighters, but Michael Bisping thinks Ferguson is the tougher fight for the Irish ‘champ champ’.

“Here’s the thing, [Nate] Diaz is saying he wants $20 million to fight Conor [McGregor] for the third time, which sounds insane. It is insane but realistically, if that was boxing, for an event that size, a fight that big for the PPV numbers, I feel like the boxer would get that money or close to it. […] But $20 million, I think what he’s doing there is pricing himself out of the market, simple as that. That’s why Dana is pushing the [Tony] Ferguson fight. Dana, by going out there at the press conference and saying publicly that Ferguson has to fight Conor, that takes the momentum away from Diaz so that’s gonna soften his stance on the 20 million. Maybe he’s just using that as a negotiation tactic but I think if he doesn’t get what he wants he’ll say, ‘F-ck it, I’m not fighting then,’ and unfortunately, there is another good fight there with Ferguson vs. McGregor.”

“While it doesn’t have the history of the Diaz-McGregor fight, that’s still a good fight and a lot of people are gonna pay to see that and that is a good backup plan for the UFC and it is the legitimate fight. Especially in the era where people are now talking sh-t about all these interim titles, it looks like a good PR move for the UFC as well. For sure [Tony Ferguson is a tougher fight than Nate Diaz]. The problem is for Tony Ferguson is that he does get hit. We saw that against Kevin Lee, he had his chin up in the air a few times and Kevin Lee exposed that. Conor, love him or hate him, the guy can fight and he can strike and he can box. We saw that against Mayweather and if Kevin Lee connected with Ferguson, sure as hell Conor will connect as well.” – Michael Bisping on his Believe You Me podcast.

The idea that Nate Diaz would ‘price himself out’ is interesting. Conor McGregor also said it back during his public speaking event in Glasgow. Bisping is right that’d it might be a good PR move to have McGregor fight Tony Ferguson. Not only will it bring more legitacmy to the belt and silcene critiques of him never defending a title, but it’s a helluva fight. If McGregor loses, it still doesn’t hurt his drawing power and Tony Ferguson becomes a huge star. If he wins? He defended his belt and is free to fight Nate Diaz or jump around for a big money fight.