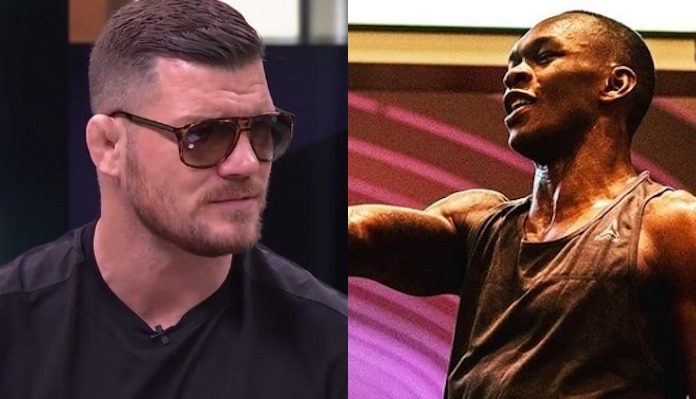 In the main event of this weekend’s UFC 248, UFC middleweight champion Israel Adesanya will look to defend his title for the first time after he claimed the undisputed championship from former champion Robert Whittaker at UFC 243 last October. As Adesanya prepares for his first title defense against Yoel Romero, former middleweight champion Michael Bisping, who is now retired, believes he’d be able to beat Adesanya if he was still fighting.

During an interview with MMA Tonight on Sirius XM, Bisping was asked about the upcoming main event title fight. While he praised both Adesanya and challenger Yoel Romero, Bisping said if he was still actively fighting, he’d be able to take the belt off Adesanya “pretty easily”.

“Listen, and here’s the real thing, if I was still fighting, I’d take that belt off him [Israel Adesanya] pretty easily, but I’m not,” Bisping said. “So, listen, I like Adesanya — I’m a massive fan of the guy — he’s a great personality, he’s a great fighter and I’m a fan of Yoel as well, it’s going to be a good one.”

While he does believe he’d make easy work of Adesanya, Bisping did credit the current champion when discussing his preview of the UFC 248 main event.

“Stylebender on the flip side, he’s got the height, the reach, the range, the diversity of strikes, he’s got excellent footwork, he does pivot off well,” Bisping said. “I don’t know who is going to win but if I had to put money on this, I’d definitely lean towards Israel Adesanya.”

As he continues his rise to stardom in the UFC, Israel Adesanya has received some high praise from those around the sport, including Bisping, but the former champion would say it’s a little too early to put Adesanya among the greatest middleweight champions of all-time.

“In terms of best champions that we’ve ever had, I mean come on mate, he’s only just f***ing won the belt, it’s a little too early for that talk,” Bisping said.

Do you think Michael Bisping could defeat Israel Adesanya?