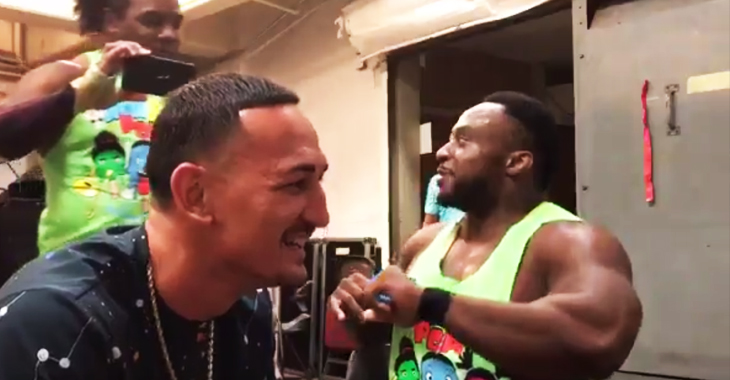 If for some reason you’ve been living under a gaming rock for the last three years, you should know that Demetrious Johnson streams video games on Twitch pretty much every single day. What you may not know, if that Max Holloway is out there owning newbs on Twitch as well. That’s right, when he’s not holding down the UFC’s featherweight division, Holloway can be found on the interwebs talking to fans and playing against them live. Lately, he made a public appearance with Big E and Xavier Woods of WWE’s stable New Day to play EA Sports UFC 2. Max Holloway got the knockout victory with a perfect elbow in the first round.

.@BlessedMMA beats a** in the ring AND on the sticks. 🎮

The clip is actually a teaser from a full episode of Up Up Down Down, which is Xavier Woods’ video game channel on Youtube, where he can be seen playing games with other pro wrestlers. As you can see, the clip was also shown on WWE’s official account, which will be big for the UFC fighter’s fanbase. Hopefully, we’ll see more of this in the future. Not just a collaboration, but more exposure to the fighters (and pro wrestlers alike) on their video game streaming, now that esports has become big business.

Max Holloway and Demetrious Johnson actually had a showdown during UFC 213 to see who was the unofficial king of the streaming UFC fighters. The two champions went head-to-head with a live audience, coaches and everything. After a wild gauntlet of Punch Out!, Arms, EA Sports UFC 2, Tekken 7 and Super Smash Brothers, Holloway came out on top. Johnson had beat Holloway when they streamed together in the past, but Holloway made it 1-1 after the event. Hopefully, they’ll settle the friendly rivalry at a future event.