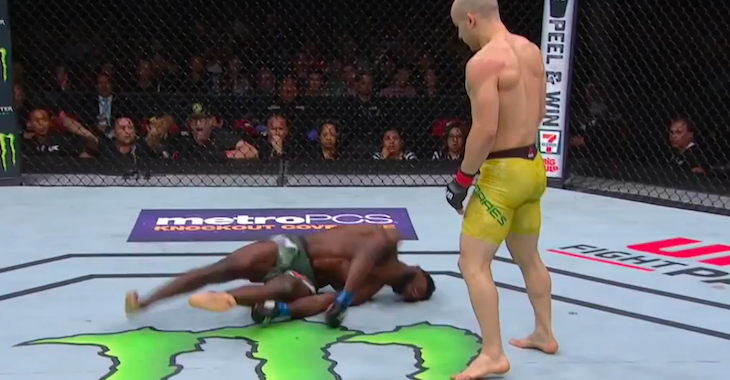 Since joining the UFC roster, Moraes has looked good, but not great, losing a close decision to Raphael Assuncao before winning a close decision over John Dodson. Last night, that changed, as he authored an absolutely hellacious knockout of Sterling.

This KO, which went down in the first round, occurred as Sterling overreached for a takedown. With expert timing, Moraes planted a knee on his foe’s face, lulling him to sleep in an instant for a perfect, walk-off finish.

Here are some of the best reactions:

I hope Sterling is ok, that was a nasty KO 🙏 #UFCFresno

That was such a brutal knockout!!

Jesus fucking Christ. That knee KO from Moraes felled Sterling like a tree!!#UFCFresno

Damn…What a knock out!! Any one else notice the dab while he was stiff 😳😳

Oh my that was just…… wow! @ufc #UFCFresno

What do you think of Marlon Moraes big knockout win in Fresno?
This article first appeared on BJPenn.com on 7/12/2017.