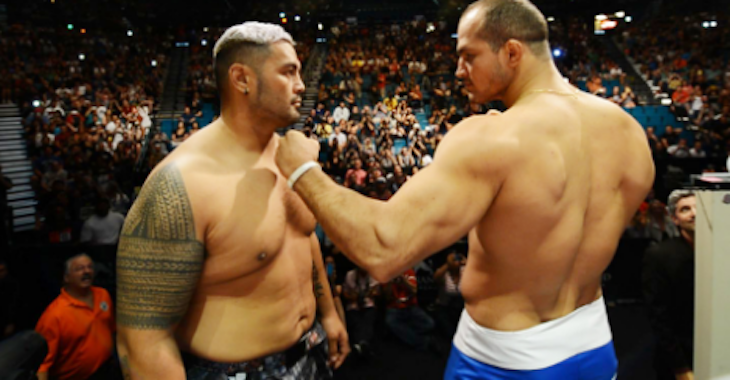 UFC heavyweight Mark Hunt is arguably the most outspoken opposer of steroid-use in MMA today. The hard-hitting “Super Samoan” is notoriously heavy-handed when asked for his opinions on fighters who have been busted for steroids. For evidence of this, see his reactions to the failed drug tests of Brock Lesnar and Jon Jones:

“Look at these f-kers,” Hunt said Mike Swick’s podcast in early August. “You’ve got Jon Jones, for instance. That guy is the best. One of the best fighters in the world, but he’s a cheater. Just like Brock Lesnar, you’re all a pack of frickin’ dog cheats, that’s all you are. Nothing else. So, now the two f-king biggest cheaters in the world are going to fight? Oh, f-k. I’m not going to waste my money watching these two cheaters fight. Why would I? They’re cheaters, in the end. That’s basically all they are. They should get nothing! I used to respect Jon Jones before this but I don’t respect him after this. When you get caught for doping —and he got caught for the same dope that Lesnar did — he’s not a martial artist, none of them are. They get no respect from me. None. I wouldn’t want to waste my f-king time watching that s-t!”

“[Daniel Cormier] should get all of Jones’ money,” Hunt said in a subsequent Instagram post. “And your a betch Jones. Cheating ass loser. Philippians 4:13 – “I can do all things through him who gives me strength plus the juice.”

When discussing his former opponent Junior Dos Santos, however, who was recently notified of a potential USADA violation, Hunt was uncharacteristically relaxed.

Hunt was asked for his thoughts on Dos Santos’ troubles by reddit user GypsyGold. Here’s his response.

“He has never been busted before so [I] will wait for [the] outcome,” Hunt said, before laying into Jones once more. “Jones was hiding underneath the Octagon for hours and has already been done. Fuck these cheaters.”

Are you with Mark Hunt on this one?